Maggie Bryant, conservation pioneer, entrepreneur, equestrian, and WILD board member, celebrates her 90th birthday at the end of November 2018. Few individuals have had as large an impact on the conservation of wild places internationally, especially Africa, as Ms. Bryant. To celebrate this milestone, the WILD Foundation looks back at just one occasion in which Ms. Bryant’s leadership changed history and helped conserve a very unique herd of elephants.

In 2002, financial support for Africa’s northern-most herd of elephants had run dry, much like the habitat upon which they depended for their survival.

For reasons that were mysterious at the time, an alarming increase in cattle herds in a remote and rugged region of Mali known as the Gourma had led to the near depletion of natural resources in the area, especially critically important water holes, upon which both elephants and humans depended. 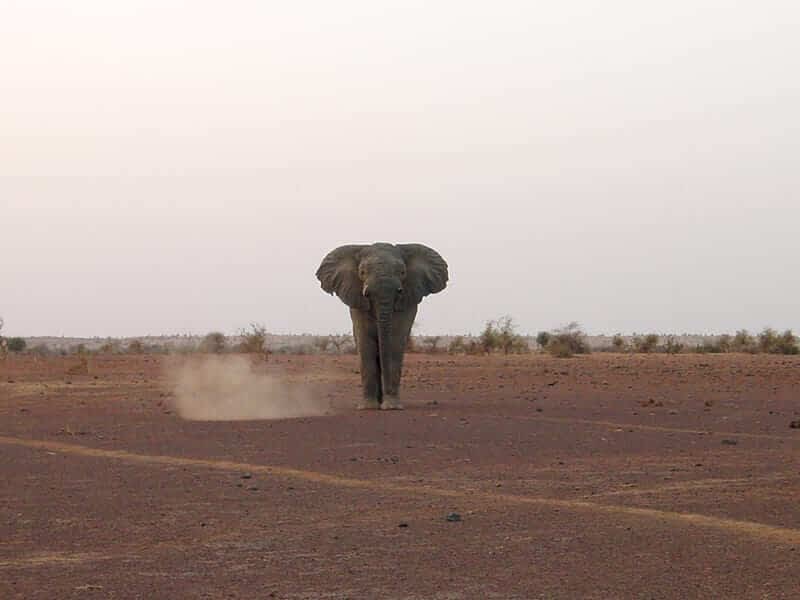 Lone bull elephant in the Gourma

Time was running out for the elephants and villages of the Gourma region.

It was in this year, that Maggie Bryant organized an intrepid trip to Mali.

Traveling in the company of US Ambassador to Mali, Mike Rannenberger, and Vance Martin of the WILD Foundation, Ms. Bryant lingered for only a few days in Mali’s capitol, Bamako, before pressing on into Mali’s formidable deserts to meet with renowned elephant conservationist, Iain Douglas-Hamilton.

Ms. Bryant, Vance Martin, Ambassador Mike Rannenberger, and others on the April 2002 expedition to Mali.

Douglas-Hamilton’s work had been critical for the survival of Mali’s elephants, but funding for the project had not been renewed and his attention was needed elsewhere. It was under Ms. Bryant’s initiative that WILD created a new project to intervene for the future of Mali’s rare, desert-adapted elephants, and hopefully, get at the root cause of their habitat degradation.

Due in large part to Ms. Bryant’s vision and generosity, and the leadership of Oxford ecologist Dr. Susan Canney and her 100% local team, the Mali Elephant Project formed, and within a few years had ascertained what was causing the Gourma’s few lakes to run dry. Too many cattle herds, most of which were prestige herds from urban areas far to the south, were drinking the Gourma’s wells dry. This was also harming the well-being and security of local communities.

But the problems didn’t stop there.

The entire ecosystem was on the verge. The anarchic use of natural resources, driven by a combination of factors that included multiple ethnicities not obeying each others’ systems; wealthy individuals plugged in to the global economy and commercial urban interests plundering the wilder areas; population pressure from the north and south as people sought fled drought-ridden areas seeking land to farm; well-intentioned development and emergency relief efforts that exacerbate the environmental impact and degradation necessitated the development of a holistic, on-the-ground model to sustainably address the problem.

One important feature of the solution was to organize a collective of elders that regulate management of the land, and recruit brigades of eco-guards to ensure their rules were being followed.

Over time and with the dedication of an extraordinary team, the Mali Elephant Project began to restore the Gourma’s water, grass, and woodlands, and consequently, the elephant herd population.

Even though the challenges for Mali’s elephants didn’t stop there (the insurgency and jihadist invasion that began in Mali in 2012 and resulted in a government retreat from the Gourma, and our team has since survived several hijacking and assassination attempts), Ms. Bryant’s intervention and the dedication and commitment of the Mali Elephant Project’s team have almost certainly saved this herd from extinction in the first decade of the new millennium. Because the Mali Elephant Project has been the only continuous stabilizing presence operating over the Gourma region (an area the size of Switzerland) their work has also been responsible for the empowerment and well-being of villages in the region too.

The Mali Elephant Project trains and employs local people and improves the well-being of those living in the Gourma.

Since its inception in 2002, new partners have joined the international effort to save this extraordinary herd of elephants, most notably the International Conservation Fund of Canada, US Fish & Wildlife Service, and the World Bank’s Global Environmental Facility. But even as we welcome new partners who are helping this project adapt to the challenges of Africa’s poaching epidemic while also training and employing local people, we, the people of the Gourma, and the elephants remain indebted to Ms. Bryant’s one-of-a-kind sense of adventure that took her to Mali in the first place, and her legendary commitment that led her to take the first step to intervene for the benefit of people and elephants.

Thank you Maggie Bryant, for your conservation vision and leadership over the years! And happy 90th birthday. Your WILD family loves you!

The Peace Parks Foundation is helping to reinvent our story with nature with the launch of PeaceParksTV.

Water, Water, Everywhere… But is it Enough For Us All?

Not Fun Fact – Water does more than just quench our thirst. It is the foundation of our way of life. And all water originates in wild nature and its life-giving services. So where does water come from exactly?

In Memory of Rory Young

It takes a special person to dedicate their life to protecting wildlife in the most dangerous places in Africa. Rory Young was such a person.