Friends of the Red Wolf 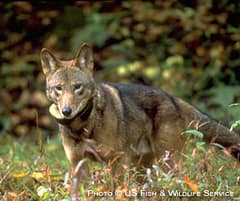 I’m very excited to announce that The WILD Foundation is partnering with my newly-founded Friends of the Red Wolf organization. The Friends group was officially launched in January of this year, and its main mission is to support the conservation of wild red wolves. Never heard of a red wolf? Don’t worry, you’re not alone. They are a little-known and elusive mammalian predator that is believed to have once inhabited the forests of the southeastern United States. I organized the Friends group after working for the past several years on a book that traces the natural history and modern management of reintroduced and highly endangered red wolves.

The WILD Foundation is a wonderful fit for the Friends group because of its deep commitment to conserving wildlife and working with local communities. Friends of the Red Wolf exists to support the U.S. Fish and Wildlife Service program which manages red wolves in their only wild population in northeastern North Carolina. The red wolf recovery area is not a wilderness. In fact, more than half of it is privately owned and the land encompasses numerous family-owned farms. The red wolf program has a long history of working with local individuals, a commitment that we see mirrored in The WILD Foundation’s values.

Today, there are fewer than 100 wild red wolves. They were reintroduced in 1987 from captive-bred animals which had been captured in the wild in the mid-1970s in southeast Texas and southwestern Louisiana. Another 200 or so live in captive breeding facilities spread across the United States. Red wolves are lightly built compared to gray wolves, but they are larger than western coyotes. Some consider them to be amongst the most endangered canids in the world. Calling them “red” is a bit of a misnomer. They are not red like a red fox, rather, the fur behind their ears and across their shoulders tends to be a burnt umber color. 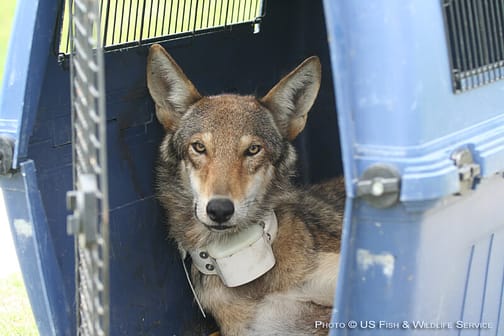 Red wolves face many different conservation challenges. One of the most pressing issues is a recent proposed change to the North Carolina Wildlife Commission hunting rules that would allow the night time spotlighting of coyotes. Red wolves and coyotes can appear visually similar, and both animals are most active at night. The proposed rule potentially places red wolves at risk of being shot in cases where the hunter may think they are targeting a coyote but may actually kill a red wolf. The Southern Environmental Law Center ischallenging the legality of the proposed rule.

Red wolves have an evolutionary quirk that allows them to mate with coyotes and produce fertile offspring. In fact, in the 1960s and 70s when the red wolf was first identified by scientists as going extinct, hybridization with coyotes was its greatest threat. Today, hybridization threatens red wolves once more. When red wolves were first reintroduced in North Carolina, the nearest coyotes were 500 miles to the west. But today, coyotes and red wolves are once more living side-by-side. The red wolf recovery program has devised innovative solutions to manage the red wolf against hybridization. I discuss these methods at length in my book, but they are very time consuming and demand equipment in the form of radio collars and telemetry gear, aerial flyovers, and veterinary services.

Because of their propensity to mate with coyotes, some scientists believe red wolves originated as a hybrid between gray wolves and coyotes. This leads them to think that red wolves were never a part of the southeastern fauna. However, other scientists disagree and believe that red wolves originated independently of gray wolves, perhaps as an offshoot of a unique North American canid lineage that was shared with coyotes. It’s this last interpretation that I embrace. I also believe that because the science is unsettled it provides us with all the more reason to work now to save what could be forever lost.

Friends of the Red Wolf functions solely to support the red wolf recovery team in their efforts to conserve wild red wolves. We hope to raise money to help the team buy equipment necessary for red wolf conservation, such as VHF radio collars and kennels used for transporting ill or injured wolves. We also hope, with time, to raise funds for research that could help red wolves survive into the future. We’re dreaming big. Why not?

We believe that red wolves need all the friends they can get. We hope that with The WILD Foundation’s partnership we can help spread the red wolf’s story to a wider audience. You can also find us on Facebook.