Nature Protection in Russia: One Step Forward, One Step Back

Several recent developments in follow up to earlier stories out of Russia are worth noting for readers of Talking WILD. Each demonstrates that Russian actions on environmental concerns remain a mixed bag and in need of continued monitoring by the international community and support for grassroots organizations within the country.

We earlier called the plans for the 2014 Olympic games at Sochi a “tug of war” (Feb. 26, 2009) to balance nature protection with plans for the games in the Caucasus region. June 5, the Russian government announced it had signed an agreement with UNEP (United Nations Environmental Program) to ensure that the Sochi games would be the “greenest” Olympics ever. In 2008 plans for construction of the bobsled run, the Olympic village, and the luge tracks were all modified to avoid a location damaging to the Caucasus nature reserve. This action appeared to be thanks to pressure from environmental groups within Russia and oversight of a United Nations panel of ecologists.

Yet, the most persistent and cautious organization keeping an eye on the Russian government’s Olympics projects, the Environmental Watch on the North Caucasus, (under leadership of Andrey Rudomakha) has written an appeal this May to the UN and International Olympic Committee because of planned road construction sponsored by the Russian super-company Gazprom (whose past chair was Russian President Dmitry Medvedev) to give access to their mountain resort development, the Olympic Ski Complex on Psekhako Ridge. This construction would disrupt a UNESCO World heritage Site and its buffer zone. The situation for nature protection in the Caucasus around the 2014 Olympics therefore is still not guaranteed with the UNEP agreement and bears careful monitoring. 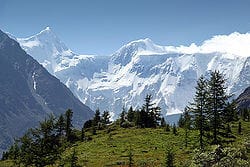 A second issue reported on here (March 18, 2009) was the January 9, 2009 crash of a helicopter in the Altai region of Russia with evidence that the party involved (which included high Russian officials) had been illegally hunting protected species of sheep, the argali. Russian environmental groups, such as WWF Russia, called for an investigation and a government commission report was released June 11 confirming that the group was indeed guilty of poaching and that the crash was due to improper maneuvering of the helicopter by the second pilot, who was actually one of the passengers.

The Russian press reported that in March of this year, as a result of the incident, there would be a ten year moratorium on hunting in the Kosh-Agach region of the Altai. The vice-premier of the Altai, Anatoly Bannyh, who was one of four survivors of the crash, resigned. Other incidents of Russian officials illegally hunting from helicopters in various areas of the country were covered in the press with subsequent criminal investigations initiated (the accused in different incidents include V. Farion, head of the Federal Taxation Service; I. Mikhalchuk, governor of Arkhangelsk region; M. Everstov and S. Samoilov, officials in Yakutia). On May 9, Igor Yesipovsky, the governor of Irkutsk region, died in a helicopter crash and there was speculation he may have been hunting bear, but that was not proven.

On the one hand, all these events signal a gross disrespect for environmental norms among some Russian government officials, but they also show that local organizations and the Russian press are attempting to bring the actions out into the open and put pressure on the government for prosecution. One thing is clear: the light of scrutiny inside and outside Russia may be the best hope for improving Russia’s dismal environmental record.