Exciting news from our sister organization, The Wilderness Foundation (in South Africa)….

Internationally Volkswagen has developed strategy around a responsible approach to environmental issues called ‘Think Blue’. It begins with the range of the highly efficient low emission BlueMotion cars, to energy efficient production plants and the support of appropriate environmental projects such as the Forever Wild Rhino Protection Initiative. 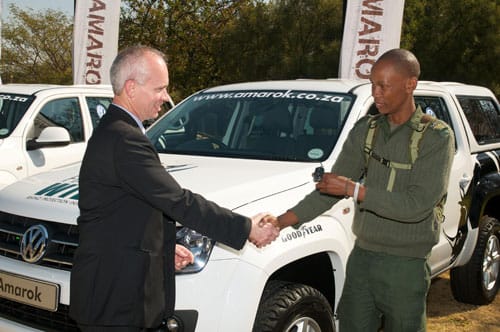 Jaco Steenekamp, General Manager: Sales & Marketing at the Volkswagen Commercial Vehicles handing over the keys of the Amarok bakkie to Elvis Nageng, a member of the rhino protection unit at one of the North West Parks & Tourism Board’s game reserves.

“Volkswagen is in the process of rolling out ‘Think Blue’ strategy in South Africa. Our current model range includes BlueMotion Touaregs, Tiguans, Golfs and Polos. Similarly, we have ground breaking initiatives at our production plant in Uitenhage and the Forever Wild Rhino Protection Initiative is the first of four environment projects we will be announcing in the next few months,” said Matt Gennrich, General Manager: Communications at Volkswagen Group South Africa.

The Amaroks were handed over to the conservation agencies in high priority areas of Mpumalanga, North West, Eastern Cape and KwaZulu Natal. The conservation agencies that will benefit from the partnership are SANPARKS, North West Parks & Tourism Board, Eastern Cape Parks & Tourism Agency, KZN Wildlife and Eastern Cape Private Game Reserves Association (Indalo). The vehicles will be primarily used in proactive rhino protection and anti-poaching activities.

Jaco Steenekamp, General Manager: Sales and Marketing at Volkswagen Commercial Vehicles, said: “Our sponsorship of the Forever Wild campaign is Volkswagen’s contribution towards the fight against the poaching and preservation of the rhino population. We are confident that the smart but tough Amarok bakkie will be an ideal partner to the conservation agencies in combating poaching activities.”

He added: “Our partnership with the Wilderness Foundation supports Volkswagen’s ‘Think Blue’ philosophy which promotes cooperation with organisations that are environmentally conscious and work towards the sustainability of endangered species.”

The latest reports show that one rhino is poached every day in South Africa. To date over 170 rhinos have been poached. To put the scale of the problem into perspective; in 2007 only 13 rhinos were poached, in 2009 the number increased to 124 and in 2010 it rocketed to 335.

In the past 40 years, South Africa has achieved unprecedented success with the preservation of the rhino population. As a result, South Africa is now home to over 90 percent of all rhinos in the world.

Dr Ian Player, the founder of the Wilderness Foundation said: “I have always been an optimist but realistic one and in the depth of my being I believe we shall succeed in saving the rhino. But do not let us be deluded, we are up against terrible dark forces that threaten to overwhelm us. In the world of wildlife conservation the White and Black rhino have been spiritual beacons of hope. All our children now look to us in our generation to ensure that the prehistoric remnants of the dinosaur age continue to exist on our Planet.”

Dr Player added: “Our first priority must be to give all the possible support to the conservation agencies and private land owners in their protection of the rhino. There is no doubt that a war is being waged and information is of critical importance, so that conservation agencies can be forewarned of where poaching is likely to occur. We have also got to look at every other alternative for the rhino survival.”

The campaign supports conservation agencies and organised private game reserves to protect their rhino populations as part of functioning natural ecosystems. The campaign also aims to focus the attention of politicians and decision makers and to encourage them to apply pressure both nationally and abroad to address the issue of the illegal trade in rhino horn and other wildlife products.

“The belief by millions of people in China and Vietnam that the horn has medical properties is very deep seated and has been for thousands of years. This belief will not be changed by rational arguments. We now need to debate in all possible forums the merit and demerits of legalising the sale of rhino horn. This debate is necessary so that the Minister of the Environment can make an informed decision,” concluded Dr Player.