Share this page with your networks to show your support for a win-win for nature and Indigenous Peoples and Local Communities. 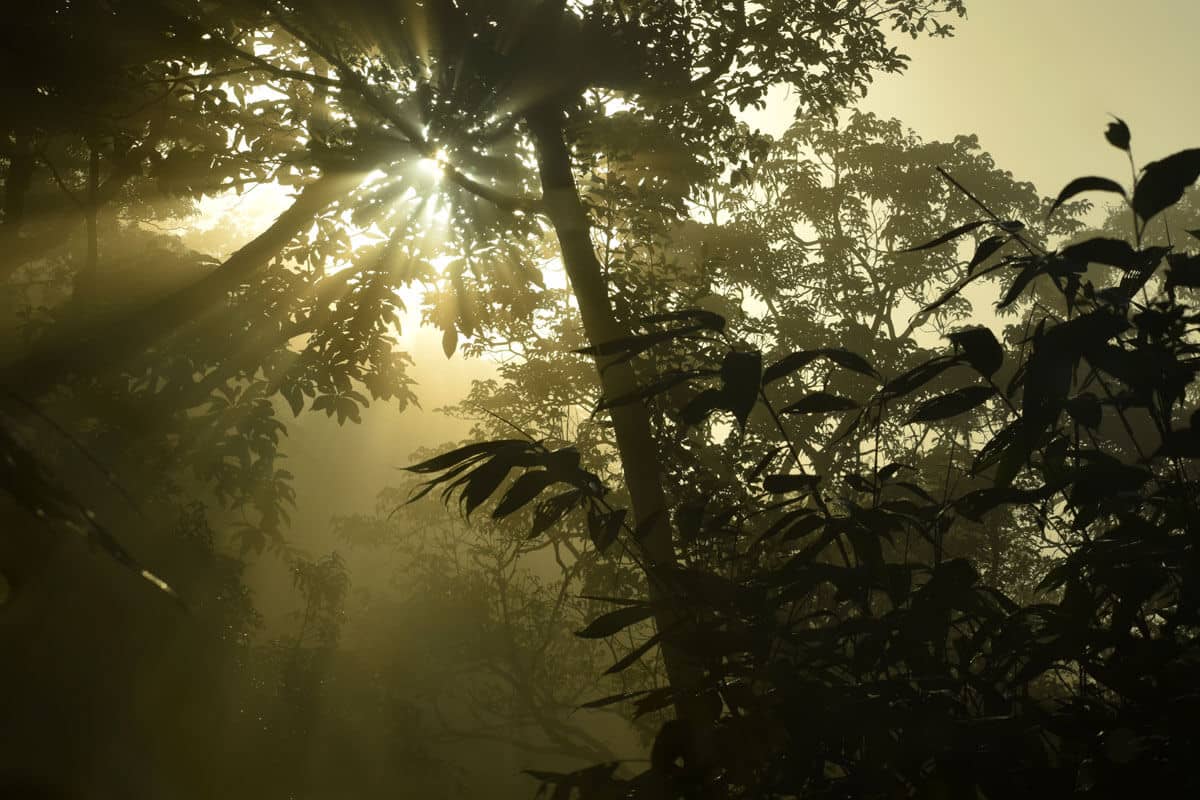 Indigenous Peoples and Local Communities (IPLCs) are the best leaders on biodiversity conservation. Not only are Indigenous lands home to 80% of the world’s remaining biodiversity, but they are also the location of close to 40% of the remaining wild areas. When it comes to conservation, even the most protected areas cannot come close to matching the outcomes produced by Indigenous stewardship of the land.

What could be possible for our biosphere if we used the necessity of protecting and conserving at least Half of Earth’s lands and seas (the scientific consensus – 30×30 is just a milestone on the road to Half) as an opportunity to expand Indigenous land tenure and restore land to IPLCs?

The IUCN World Conservation Congress convened in Marseille, France in September of 2021, where the world’s leading conservation scientists and leaders voted in an overwhelming majority to formally recognize the scientific consensus that conserving Half of Earth’s lands and seas is necessary to successfully address the twin existential crises of mass extinction and climate change. As a part of this agreement they also recommended that at least 30% of the Earth’s surface be conserved by 2030 and to do so in full partnership and with the free, prior, and informed consent of Indigenous Peoples.

As the world meets once more for the Convention on Biological Diversity to seemingly decide again on what was already agreed upon over a year ago, WILD continues to advocate for the conservation of Half of Earth’s lands and seas with an emphasis on the restoration and expansion of Indigenous land tenure.

Learn more about WILD’s position on the CBD. Download the PDF. 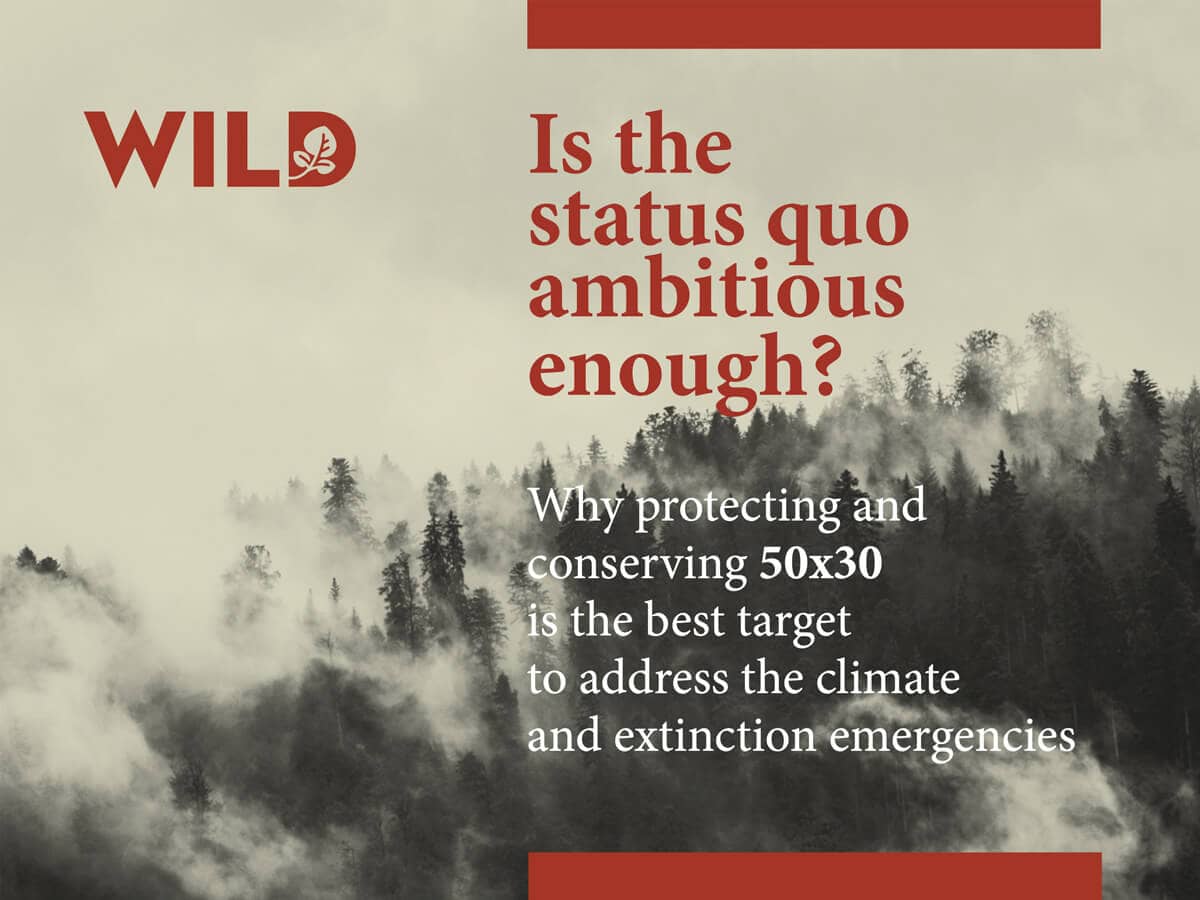 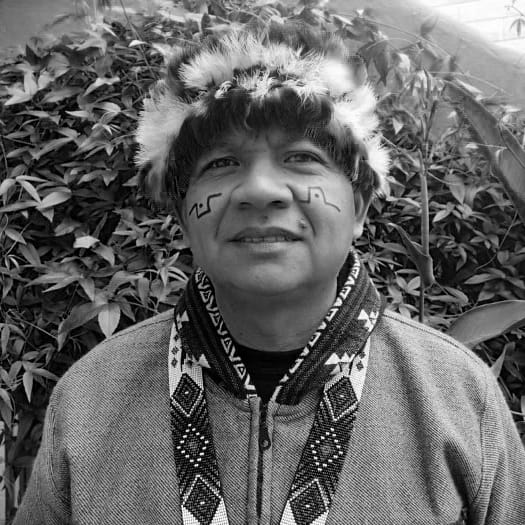 Governments have proposed to protect only 30% of the areas that give life to this planet. Only 30% by 2030! By its own right, humanity must manage to protect at least 80% of our Amazon in a very short period such as 2025 to continue to hope for a just future for all. So that the river continues to feed us and the jungle continues to heal us, because the Amazon is life, because our watersheds are sacred!

The safest, most scientific and economic way to bring Earth’s biosphere back to balance is to use nature-based solutions to rewild the varied ecosystems of our planet. This would dramatically promote species recovery, which is what all life on Earth desperately needs because in the words of Craig Foster, of My Octopus Teacher fame, “Biodiversity is the immune system of our planet.”

Research shows that in order to avoid ecological collapse and reach a balance between humanity and the planet, we need to have half of the Earth in its natural state. That’s more than we have now. We need to stop the bleeding of our remaining pristine habitats and begin to restore those ecosystems we have degraded or lost. Reserva: The Youth Land Trust supports this initiative to protect half of the earth by 2030. Future generations depend on our ambition, as do we.

How much land is conserved now?

Currently, approximately 34% of Earth’s terrestrial areas are conserved. This figure is the combination of all terrestrial protected areas (17%) and Indigenous lands (also 17%) which will fall under a new conservation area category known as OECMs (other effective area-based conservation measure).

What that means is that the much vaunted idea that 30% is an ambitious target is actually misleading. With current levels of conservation, 30% is actually the status quo. In fact, it is probably less than the status quo. While it may be politically ambitious to agree that we need 30% conserved, ecologically we have already achieved it even if the understanding of diplomats and politicians lags behind this reality.

How do we get to Half?

Increasing the level of conservation from 34% to the scientific consensus of Half can be achieved in a number of ways, some better than others. WILD supports an approach that places the priority on the restoration and expansion of IPLC lands. And we can achieve this through a number of strategies, including: honoring current poorly implemented treaties and land agreements between IPLCs and states, creating new land agreements with IPLCs where none exist, restoring sacred sites to IPLCs, and creating IPLC managed corridors between neighboring ecologically intact areas.

We can supplement this strategy by creating protected areas in areas not claimed by IPLCs or only with the free, prior, and informed consent of IPLCs. As the global activist group Avaaz urges, “Nothing about IPLCs without IPLCs.” IPLC leaders must occupy new leadership positions at the forefront of the global spatial target movement. Rewilding and restoration efforts will need to occur in new protected areas and on IPLCs lands. These processes should be driven in large part by IPLC land managers.

Will every country be required to protect Half?

No. Half is a global target, not a country target. While on average we need approximately Half of Earth’s surface to remain ecologically intact in order to successfully address mass extinction and the climate crisis, some ecosystems need far more than Half to avoid collapse. The Amazonian rainforest is among these, requiring approximately 80%, a threshold it is fast approaching. This is why COICA, the Coordinator of Indigenous Organizations of the Amazon River Basin, have called for the protection of 80% of the Amazon by 2025.

Other ecosystems, like grasslands, only require 40% intact to avoid collapse. Each country will need to develop its own scientifically-backed plan, with IPLCs playing a major role in the development of such plans, to determine what percentage of land is needed to continue to support the functioning of Earth’s biosphere for all life.

How to protect biodiversity and meet the needs of people?

People need biodiversity. It’s that simple. Earth is a living green engine that produces, through biodiversity, all the conditions necessary for human communities to survive and thrive. Drilling down these numbers, high levels of surrounding biodiversity are one of the leading indicators for the success of small land holders. The United Nations reports that the livelihoods of 1.6 billion people (20% of Earth’s human population) depend directly on wild nature. When we conserve the land and the biodiversity that lives on it, we support life on Earth and people.

How do we ensure there is no instance of displacement under 30x30/Half?

While conservation is frequently cast as the enemy of people (an accusation that is absolutely justified on a case-by-case basis), land displacement happens just as frequently (and probably more so) under other regimes, especially those of industrial agriculture and extraction. To overcome these human rights violations, conservation (and all other sectors of society) must recognize and abide by the international conventions governing the rights of IPLCs, the United Nations Declaration on the Rights of Indigenous Peoples (UNDRIP) chief among these.

This is why 30×30 and Half must place IPLC leaders at the forefront of decision-making, recognizing in each agreement the rights of IPLCs to the land and free, prior, and informed consent as a minimum of what is required for a just conservation sector.

How can we act on this information?

While nearly everyone knows that we must keep temperature rise under 1.5 Degrees, few know or understand why we must protect Half or that we can and should do so by expanding Indigenous land tenure and rights. Knowing is half the battle which is why we are asking you to share this information with your networks and other conservation leaders.

In addition to talking about Half and building strong and supportive constituencies, we must also work more with IPLCs, and not just as partners. We need to actively listen to the recommendations and needs of IPLCs and take the necessary actions to meet their needs and manage the land accordingly.