Protecting the sovereignty of the Yawanawá People for the benefit of their culture, the forest they steward, and its role in producing life-giving services for us all.

For hundreds of years the Yawanawá People have stewarded healthy and intact forest biodiversity and continue to do so even today. Supporting and expanding the rights of the Yawanawá and other Indigenous Peoples to steward their traditional lands is an important and efficient way to protect our biosphere.

The Yawanawá and other Indigenous Peoples’ lifeways are under attack, first from short-sighted political leaders, illegal loggers and miners, and now from the coronavirus. If they are to continue to successfully protect the forest for all of us, we must aid them by supporting progressive and sustainable policies and providing immediate assistance in times of crisis.

The Amazon belongs to humanity: let’s protect it together

Tashka Yawanawá and Laura Soriano lead the Yawanawá people in Acre, Brazil — a tribe that stewards almost 500,000 acres of Amazon rainforest. As footage of the Amazon burning shocks the world’s consciousness, Tashka and Laura call for us to transform this moment into an opportunity to support indigenous people who have the experience, knowledge and tools needed to protect the land.

Protecting the life-giving services of our planet by defending Yawanawá land rights so that they can continue to steward the forests that serve all of us.

A message from Chief Tashka Yawanawá

The virus threatens the most sacred things we have. We are taking steps to protect ourselves here within the forest, to keep the forest at peace and us too. But not all threats to our survival and the survival of the forest can be solved through our actions alone.

We need the help of others to support us in our life plan and our right to steward the forest as we have done for hundreds of years. While we can all take actions in our own individual lives and individual communities that will help mitigate threats to survival, these actions must also be combined with good leadership and good policies.

Yes! I stand with the Yawanawá

How WILD works with the Yawanawá

Strengthen global awareness of the critical role Yawanawá lands and leadership plays in protecting the biosphere.

Advocates for positive leadership and policies that support, instead of erode, Indigenous land stewardship.

Assists with raising and transferring funds to support the Yawanawá Life Plan, part of which is for the protection of the primary forest and their traditional homeland.

The Yawanawá in Brazil

The Modern History of the Yawanawá 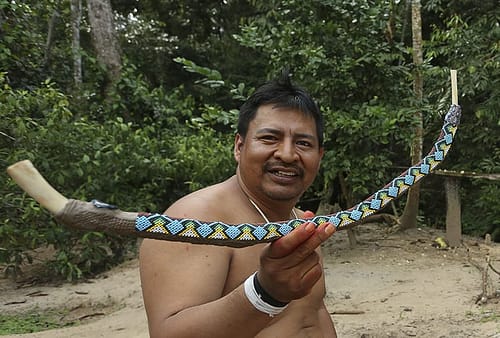 Against great odds, the Yawanawá people are a come-back story. As a boy, the Yawanawá Chief, Tashka, was removed by his father from the remote village of his birth, to escape the disease and declining well-being of his people. He went to school, learned Portuguese and some English while he also experienced the world outside the forest. In the meantime, his father led the small tribe as it became the first indigenous group in Brazil to successfully lobby the government for official recognition of their land, and they were formally awarded 92,000 ha in 1984.

Tashka decided to return to the community and accept his responsibilities as one the youngest chiefs in tribal history. With barely 600 people scattered across six remote villages, living entirely off the land and a small amount of agriculture, the Yawanawá and their culture were teetering on the edge of survival. And yet, they had their forest, and their traditional knowledge. 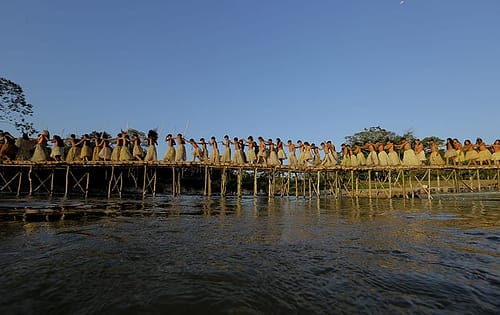 By 2003 he had engineered one of the first agreements between an indigenous group and a major corporation to legitimize and establish compensation for a mutually beneficial working relationship.

And the Yawanawá community grew, now with some 1200 members spread across numerous villages with one central village Novo Esperanza (New Hope) as a unifying location. Tashka and wife Laura Soriano created a unique Yawanawá Life Plan to strengthen their culture, encourage sustainability, and protect their forest against a rising tide of illegal logging, mining and ranching. The threats do not diminish, and with no oversight or enforcement from Brazil’s current government under the dictates of President Jair Bolsonaro, these threats are now escalating rapidly and with impunity.