How do wildfires affect our wildlife?

View of the Calwood Fire from Wonderland Lake © Melanie Hill

This has been a devastating year in the West with wildfires, and in Colorado specifically we’ve had yet another record-breaking season. This past October, three significant fires (East Troublesome, Calwood, and Lefthand Canyon) erupted to join three other large fires (Middle Fork, Williams Fork, and Cameron Peak) that had been burning for months. And don’t forget that before Cameron Peak became the largest wildfire in the state of Colorado’s history, the Pine Gulch fire – which burned just over 139,000 acres – initially held that title earlier this summer.

The tragic consequences these fires take on our human communities are insurmountable, with many lives, structures, memories, and properties lost. The Calwood fire was particularly close to home, burning over 4,000 acres of Boulder’s beloved Heil Valley Ranch. When fires like these occur, we also wonder – how do they affect our wildlife populations?

In a recent journal entry posted on our Boulder County Wildlife Project on iNaturalist, Boulder County Parks & Open Space wildlife biologist Dave Hoerath weighs in on that question. Here’s what he has to say:

The ponderosa pine forest ecosystem evolved with periodic fire, and the burn effects of most fires are just part of the deal. Unfortunately, the Calwood Fire was a bit more intense than the normal range of fires affecting montane forests. The drouthy conditions, winds, temperature, and the fire’s own heat created some severe fire behavior and severe impacts, burning whole trees, whole stands of trees, and the duff and soil beneath them. Those high severity areas aren’t much for habitat anymore—unless you are a forest insect or bird that feeds on them. Conditions will be very good for that suite of species for the next few years. 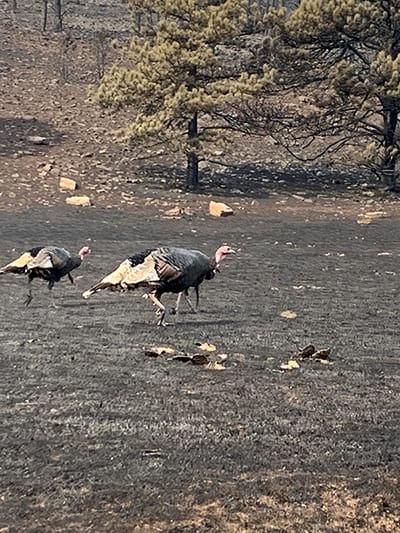 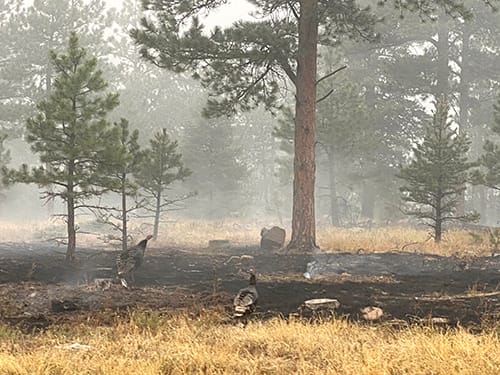 But for many other species, ”home” is gone. Small mammals may have been able to get into rocks or the duff layer or those pockets of forest that didn’t burn severely. But surely many animals did not make it out of the path of the fast-moving flames and toxic smoke. Abert’s squirrels may have been particularly hard-hit at Heil Valley Ranch, directly and indirectly. Much of the good habitat that was occupied by squirrels is now torched matchsticks. It won’t be Abert’s squirrel habitat for a very long time. In fact, some areas may not revert to forest, due to the effects of climate change and the lack of seed source. We may get some conversion to grassland or shrubland as we have seen in recent severe Boulder County fires like Black Tiger, Walker Ranch, and the Overland Fire.

Luckily, a late season fall fire doesn’t directly affect the songbird population, which has already migrated. Birds, in general, just fly out of the burn zone and come back after the fire. However, of the returning migrants next spring, many will be forced to go somewhere else or be shoe-horned into the unburned fingers and patches of the Calwood Fire. Most larger mammals are also mobile enough to avoid fires and flamefronts. In the dark and confusion of the fire, and the difficult terrain, we have discovered some mortality in those large mammals. But we have also seen deer, elk, and turkeys back in the burned areas at Heil Valley Ranch. That habitat is likely in less-than-optimal condition. They too will likely be forced to use different areas or larger areas to make up for the habitat altered by the fire. They are lucky that portions of Heil Valley Ranch are closed to the public and that portions of the area burned will also be closed temporarily (for safety) to give them some time and space to adjust and recover.

Are wild animals fleeing to our urban areas?

Colorado Parks & Wildlife (CPW) district wildlife managers Tyler Asnicar and Sam Peterson were at the scene at Heil Valley Ranch during the Calwood Fire. While working to evacuate the area, they witnessed numerous mule deer fleeing from the fire and said it was obvious that they knew they needed to get away. Asnicar and Peterson don’t believe they went far, however; just far enough away to escape the fire. There will always be some loss of wildlife during wildfires (especially with low visibility due to smoke), but most species tend to be fairly quick to get away.
While perusing the neighborhood networking platform, Nextdoor, I observed one common concern being asked among residents: are wild animals fleeing to our urban areas as a result of the wildfires? Should we be leaving out buckets of water in our backyards to help them survive? According to Asnicar and Peterson, the answer for the most part is “no” to both questions. It’s not uncommon for wildlife to occasionally meander through our neighborhoods and urban areas – especially in west Boulder during this time of fall hyperphagia (a period of intense eating) for black bears. Again, these animals would probably not travel far and would be more likely to compete for resources nearby and move back into the area shortly after the fire resides. Elk, for example, will return less than a week after areas are burned – even with hot spots still burning.
While residents have the best of intentions in mind in regard to leaving out buckets of water for wildlife during periods of drought and wildfires, CPW does not condone leaving out water or food. “[Leaving out water] can be as bad as leaving your bird feeders up in areas with black bears, especially if it is a consistent source and no nearby sources of water exist. Please do not put out water for wildlife!,” said Asnicar.

Where do we go from here?

There’s no doubt that fire is an important process that promotes biodiversity in our natural ecosystems. Unfortunately we are seeing that “dry conditions also set the stage for bigger, hotter wildfires. Eight of Colorado’s 20 largest recorded fires hit after 2018 and all occurred in the last two decades. And the three largest burned in the last three months,” according to a recent article in the Denver Post. “For three decades, forest managers have advocated — especially after big burn years — increased forestry work such as thinning to let in more light and encourage species diversity, restoring natural resilience. That way fires could burn without causing catastrophic scorching and sterilization.”

With fire seasons being stretched out longer and becoming more extreme each year, we must work together to support the organizations and agencies working to improve forest and ecosystem health. Instead of suppressing fire — a reactive process — proactively thinning forests, practicing safe prescribed burning, and implementing fuel reduction treatments may help us better protect human communities and wildlife found in the wildland-urban interface.

We asked WILD’s program directors to share with us their biggest hopes for our future and the obstacles they face. This week, we feature Melanie Hill.

Do you know who your neighbors are?

Our backyards and neighborhoods are teeming with wildlife, whether you know it or not.

As citizen science initiatives continue to increase in popularity, this year’s third annual City Nature Challenge expanded to more than 65 cities across the globe.