A Bison Blog—From Yellowstone to Haarlem

In a recent, three-day period I had wild encounters of a similar sort on two continents. Both encounters tell a story of past and current “re-wilding,” enabled through the vision and dedication of people and organizations that understand the essential role of wildness in a healthy and sane planet earth.  We need these positive stories as much as we need the return of wildness that they chronicle.

Yellowstone – Driving from Bozeman (Montana) to West Yellowstone to chair a meeting on the World Heritage Status of Yellowstone National Park, I was a bit early so I took a detour through the Park — I knew I would not be back before winter closed in.  Halfway thru the Park, the not-unusual experience occurred  — traffic slowed to a crawl, so I looked for wildlife. A great cloud of dust enveloped a small hill to my right, and as the sun’s low rays reflected through the cloud of dust, I saw the partial outlines of bison rolling around in a dust bath.  It was early morning, cool, and they were moving quickly, rolling, snorting, and running…a herd of about 30-40.

They slowed as they approached the road and, voilá, my car was stopped and then surrounded  by bison faces,  moist noses, shaggy coats, and steamy breath.  For 10-15 minutes I was tete-a-tete through my window with the iconic, large, North American mammal, and I had time to reflect on a well known but always amazing story.  By the late 19th century the “American buffalo” was almost extinct, their tens of millions decimated in decades.  In just one period, between 1871 and 1874, four million were killed in the Southern Great Plains alone, and their hides shipped East.  By 1889 the remaining remnant was some 1000 animals total (both plains and wood bison) throughout all of North America! 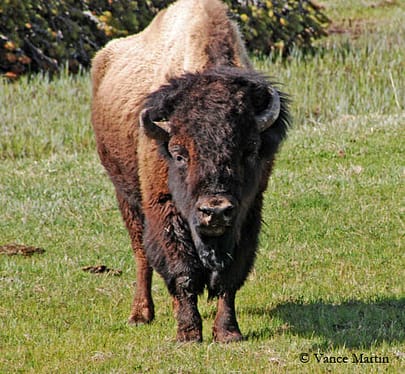 As is often the case, the “scarcity reaction” thankfully took hold, and people started to respond…just in time.  Through a concerted series of public/private initiatives, in North America today there are some 30,000 wild and free roaming bison, and over 400,000 bison in commercial herds.  This recovery is remarkable and is ongoing.  The American bison, listed today as Near Threatened on the IUCN Red List, remains at the center of “the most ambitious and complex undertakings in species conservation efforts in North America.”

Haarlem (Netherlands) – Two days later I was in the Netherlands, co-chairing an Executive Committee meeting for WILD10, the 10th World Wilderness Congress (Spain, 2013).  What a contrast…from the wide open spaces of the American west to the most densely populated nation in Europe.  My meeting in Yellowstone was on the border of the 900,000 ha (2.2 million acre) park, and our meeting in the Netherlands was inside the delightful  Zuid-Kennemerland National Park, of some 3800 ha (9400 acres).  This postage stamp-sized coastal park protects a fabulous area of wild sand dunes. 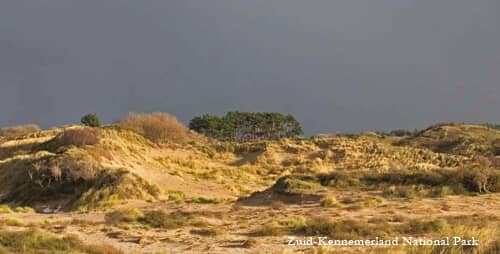 I discovered with interest that even though this special National Park is less than 1% the size of Yellowstone, it receives almost the same amount of visitors…two million annually! Despite this immense pressure, there is wildness there.  What’s more, there is also dynamic and exciting re-wilding, and a contemporary equivalent to that which started with the American bison over 100 years ago.

Our local partner, Rewilding Europe, arranged for us to go into the private access section of the park, guided by Yvonne Kemp (of ARK Natuurontwikkeling)  that is home to a herd of almost 20 wisent, or European bison.  We walked for 30 minutes or so until we suddenly saw the herd, slowly grazing/browsing its way through a forested dune system…an awesome sight.   We watched for over an hour, gradually coming to within 50 meters, as the diversely-aged herd moved through the brush and sand.

The European bison (the largest European mammal, of which there are two subspecies) was hammered even worse than its American cousin.  By 1923 there were only some 54 survivors, all in zoos and private collections…none in the wild. Today, thanks to the concerted efforts of committed conservation visionaries, there are more than 2,700 free-roaming bison in numerous parks and reserves, the most well-known of which is, of course, Poland’s Białowieża Forest.  Even more, there are captive breeding centers in about 30 countries around Europe, and a united agreement to re-locate animals to parks and other protected areas throughout the continent. 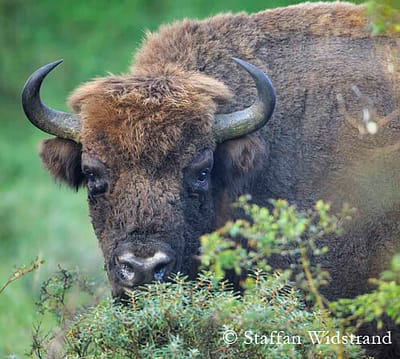 In addition to the wisent, Zuid-Kennemerland has also reintroduced the Konik horses, descendents of the original wild horses that roamed freely over Europe and Asia.  We also watched the Koniks for a long time, where they always had one “sentry” atop a dune while the others grazed below.  The Koniks and wisent were the original mega-grazers and browsers that helped shape the mosaic landscape of the ancient European wilderness…and they are returning.

It is not only possible for wild nature and human society to integrate, interact, and support each other…it is necessary.  We are approaching seven billion people on Planet Earth and on a trajectory to nine billion, at least, until the population curve levels off.  As the vision Nature Needs Half defines for us, it is essential that we maintain large, interconnected wild areas in order to assure that nature can continue to provide the life-support services for humans and all life. In addition, it is also essential that we implement re-wilding, and regenerate wildness through intensive programs that restore flora and fauna into areas that once supported them.

Rewilding is not new, but it is gaining force, expertise, and urgency.  It is a core paradigm and practice of  the 21st century, one that brings hope, health, sustainability, and sanity to our lives.