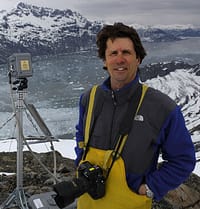 James Balog and his team at the Extreme Ice Survey (EIS) have been busy!  Not only are they documenting 15 glacial sites with 27 state of the art time-lapse cameras, they are bursting at the seams with exciting news, press appearances and more!  Last week, Balog was on NPR’s Fresh Air.  Don’t worry if you missed it on air, you can read about the interview and listen to the podcast online.  On Sunday, he appears on CBS Sunday morning in Colorado (sorry, if you missed this, not sure where to find it online!).  And, tonight NOVA will air a two-hour documentary on EIS.  Filmed during several 2008 expeditions.  It will show an in-depth look at the living science of EIS, and behind-the-scenes footage of the severe conditions enduring by the EIS expedition teams.  Learn more about the documentary and check local air-times >>

The NOVA special coincides with the release of the new EIS book “Extreme Ice Now: Vanishing Glaciers and Changing Climate: A Progress Report.”  Find out more about ordering Extreme Ice 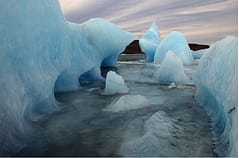 Possibly more exciting for the WILD office crew, is that this afternoon (in just a few hours!) Jeff Orlowski, the co-director of the EIS Film team, is coming by to run through a presenation he’ll give at the World Wildlife Fund later this week.  We’re very excited to see some of the latest images from EIS and to have some of their team at the WILD office!