A study was conducted in 2009 and 2010 to count the animal species whose territories overlap the heavily traveled section of I-70 in Colorado from Dotsero to Golden.  The results of this study are helpful to support the construction of wildlife over and underpasses since it shows the vast diversity and numbers of animals that could be at risk of vehicle collisions.  The study also showed that black bears are present in the area where the I-70 wildlife bridge is intended to be built.

Black bears are the most common bears in North America.  They are mostly black with caramel colored snouts in the east but as you go further west they can be blond, brown, cinnamon colored, or even white; but they are all still black bears.  The brown black bears are easy to mistake for grizzly bears, but there are some easily identifiable differences.

Have you ever heard a black bear’s growl?

The bears have to eat continuously throughout the warm months to build up body fat  to sustain them through the winter, so they will take whatever they can get their paws on –  so they’re “opportunistic omnivores.”  They eat mostly berries, nuts, and insects but will also eat honey, fish, and small mammals when they can.  Many bears have also learned to become raccoon-like and dig through garbage bins, creating huge problems especially in  the Rocky Mountains.  The Colorado Division of Wildlife has many PDF links with information on living with bears and keeping them wild. 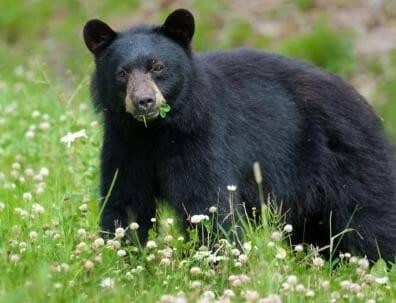 In the beginning of summer, bears begin preparing for winter hibernation by digging a den.  Digging a den is a crucial piece of black bear survival.  It’s instinct–even orphaned cubs know how to do it.  The den is where the bears hibernate and a mother will give birth to her cubs.  During hibernation, black bears’ heart rate will slow from 90 to 8 beats per minutes and do not eat, drink, or pass waste for the entire winter. 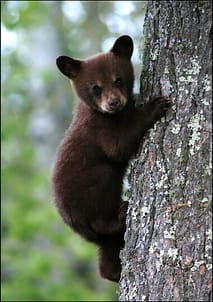 > BBC video of a mother and cubs preparing for the winter

Black bear cubs are born in mid-winter and once they leave the den in early spring, learn from their mother how to forage for food. The cubs are dependent on their mothers for a full year and by their second autumn will become independent.  Male bears tend to wander off to find their own territory and will eventually establish one that is up to 140 square kilometers.  Female bears’ territories are much smaller, only 10-15 square kilometers.

> Video of undisturbed mother and cubs

A series of wildlife over and underpasses were constructed along the Trans Canadian Highway in Banff in the late 1970s and have proved the effectiveness of these structures by using various photograph and counting methods.  A study done over the course of 10 years starting in November of 1993 showed that black bears used crossings 526 times.  In the first few years of the study very few animals used the crossings but, as time went on the bears, along with other species, used them with greater frequency, which shows that animals need time to adjust and become comfortable with the structures before they use them in their regular route.

Black bears need large territories in order to survive, and many of them include highways.  This is the same for many other animals around the world.  Nature Needs Half is an initiative to protect and interconnect 50% of natural lands and waters around the world. Wildlife bridges are an important aspect of this initiative because they enhance landscape connectivity, connecting territories and allowing animals to use their entire habitat without the danger of a vehicle collision. Show your support and share your thoughts on wildlife overpasses at the Nature Needs Half Facebook page!

**We encourage readers to comment on this post, the information for which was consolidated from numerous on-line references**