Celebration of the Zululand Lions

Below is an expert from a story by Tim Condon in the Zululand Observer celebrating the 50th Anniversary of the lion named “Nkozi,” his epic trek into the iMfolozi Wilderness and the great conservation heroes who played a key role in saving this lion and countless other animals – Dr. Ian Player, his mentor Magqubu Ntombela, Hugh Dent, Paul Dutton, Nick Steele and others.  This great trek is also told in Ian Player’s Zulu Wilderness (page 50). 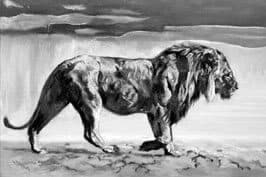 This year marks another important milestone in the history of Zululand’s game reserves – the 50th Anniversary of ‘The Return of the Lions’. This after a lone male, affectionately named ‘The Old Man’, or ‘Nkosi’ (Chief or King) by thrilled rangers, had set off on an epic wandering trek southward from Maputaland, finally settling in the sanctuary of the iMfolozi Wilderness area. All Zululand’s wildlife fraternity was enthralled at the surprise arrival of Nkosi, which was to turn Zululand’s wildlife management topsy-turvy. It would also herald the beginning of a tumultuous era of conflict and saga as the battle raged to save him and his soon to be illegally introduced lionesses by passionate NPB field staff. The last lion shot in iMfolozi was in 1916. Thereafter they were chased and hunted further northwards, until finally wiped out in the then Tongaland during the WWII anti-nagana game extermination campaign. Then in 1956, game guards reported the spoor of a large lion, which excited the Mkuze warden, ‘Singie’ Denyer, but soon they returned northwards back across the border. However in June 1958, spoor was again reported. ‘The largest Lion in Africa’, hailed an ecstatic Singie, but this time going south, crossing the Mkuze Game Reserve, towards the St Lucia Lakes. The trek had begun…..