Last night wrapped up the Boulder International Film Festival with a sold out screening of “Chasing Ice”. The film, which recently won the Excellence in Cinematography Award for a U.S. Documentary at the 2012 Sundance Festival, also took home the Best Adventure Film Award last night at BIFF! 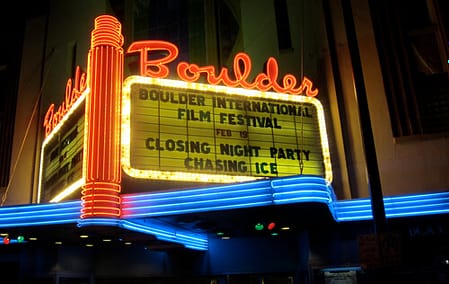 The WILD staff attended the closing night awards ceremony and screening of “Chasing Ice” last night, and I must say we were absolutely blown away by this film! The amazing story of the Extreme Ice Survey, one of WILD’s partner projects and an initiative of conservation photographer James Balog, was portrayed with beautiful imagery and the team’s dedication to telling the story of the world’s melting glaciers. Director Jeff Orlowski follows Balog and his team as they deploy numerous time-lapse cameras throughout the Arctic to capture the effects of the world’s melting glaciers in a period of 5 years.

Although the EIS team successfully produced this beautiful award-winning film, they experienced many hardships along the way. Extreme weather damaged many of the time-lapse cameras which were programmed to take photographs once every daylight hour; Balog suffered from recurring knee injuries and surgeries which made it difficult for him to continue on his expedition–but in the end the team was able to tell their hauntingly beautiful story.

Directly following the film, the “Chasing Ice” team & filmmakers finished with an informative Q&A session. Balog, a former skeptic of climate change said in the film, “The public doesn’t want to hear about more statistical studies, more computer models, more projections. What they need is a believable, understandable piece of visual evidence. Something that grabs them in the gut.”

And that is exactly what it did. “Chasing Ice” is a must-see film–if this doesn’t inspire you to take action, I don’t know what will!