Kayapo Prowess – Could you defend a rainforest from deforestation without an iPhone? 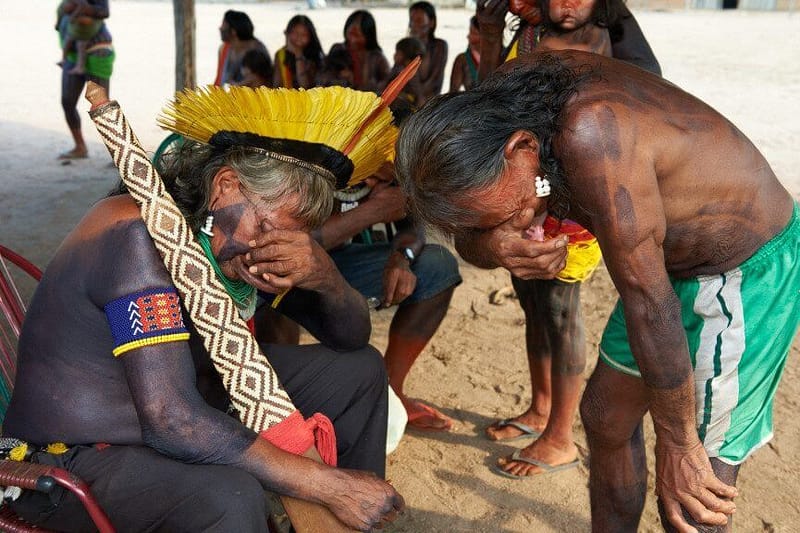 This is the second installment of a four-part series featuring a partner project in the Nature Needs Half Network. Each installment will run weekly, and every month we will spotlight a different member of the Network to reveal how their work is connecting nature across the planet for the benefit of all life on Earth and to ensure that we achieve our goal of 50% protected by 2050.

For more information about this project, please contact jackieb@natureneedshalf.org

Summary: A picture may be worth a thousand words but what if the picture is misleading and the words are inaccurate? In this installment of the Nature Needs Half Field Guide to the Kayapo Project, we get at the stunning truth that energizes the resilience and unwavering will of Chief Raoni and the Kayapo people to protect their land at all costs. Without the assistance of modern technology, Chief Raoni is relying on the help of NGOs. But attracting the attention of world leaders and experienced conservationists is difficult in the middle of a rainforest. How the Kayapo developed and sustain outside alliances is a critical component of their success and the subject of this blog.

Learn more about Nature Needs Half

When we left off last week, we had just begun to discuss the Kayapo’s incredible ability to leverage traditional skills and knowledge to defend their home and the rainforest from an amoral and technologically advanced foe.

Given that information, few things could be more certain than the courage, resolve, and strategic sophistication of the Kayapo people and their leader, Chief Raoni.

That is why, this picture, which made its way around the Web a few years back is so puzzling. 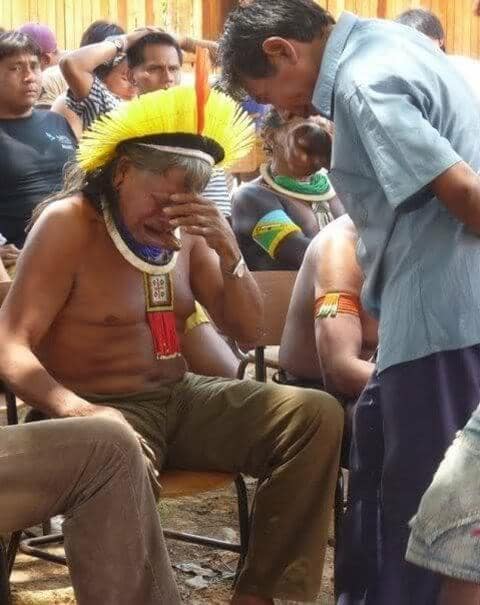 It is purported to show Chief Raoni weeping upon receiving news of the approval of a hydroelectric dam project that would destroy his people’s homeland. It was accompanied by the following description:

“We know that a simple image is the equivalent of a thousand words, it shows the price to be paid for the ‘quality of life’ of our so-called ‘modern comforts.’ There is no space in the world anymore for those who live differently. Everything has to be smoothed away, that everyone, in the name of globalization must lose his and her identity and way of living.”

If you’ve read the previous installment of the Nature Needs Half Field Guide to the Kayapo Project, you might, at this moment, be confused. In fact, I bet you may even have formulated a couple of questions about this picture, questions like, “Is this really the way the leader of a people who has, for decades, withstood the onslaught of industrialization, responds to bad news?”

And if, indeed, you are asking questions, then congratulations! You have been paying attention.

After all, it would not be unreasonable to assume that the organization of the defense of a remote region of dense tropical forest from criminal networks hell-bent on profiting from its destruction is not a mission for the faint of heart, regardless of experience level or availability of resources. That the Kayapo are accomplishing this without the benefit of satellites, helicopters, roads, computers, or even a rotary dial phone would be considered by even veteran conservation professionals as nothing short of extraordinary.

In terms of real-life David-versus-Goliath scenarios, you don’t get much pluckier than Raoni and his 8,000 tribesmen.

So you are excused for thinking that Chief Raoni’s tears are a little out of character. Because they are.

In fact, Raoni was crying for an entirely different reason. Just as it is customary, in Kayapo culture, to resist industrialization tooth-and-nail, it is also customary to cry when being reunited with relatives after a long absence. It’s almost like a greeting card, only Kayapo-style. And that’s precisely what Chief Raoni was doing in this picture.

In fact, Raoni himself has something to say about it:

“I was not crying because the government’s decision,” confirmed Raoni. “I’m going to keep fighting. I am alive and strong, and as long as I’m alive I will continue to fight for my people.”

And if we all lived by such words, how might the opportunities of our world shift toward a sustainable relationship with nature? I bet Chief Raoni would have a thing or two to say in answer to this question.

So how exactly are the Kayapo defending the rainforest and their traditional home?

Hint: They aren’t doing it alone.

Raoni knew that the outside world was not without its attractions. His people would have difficulty resisting the short-term gains, like medicine, radios, and modern creature comforts, that would ultimately lead to the permanent demise of the Kayapo culture and their stewardship of the rainforest.

The survival of his people and the rainforest depended upon uncovering a solution that allowed the Kayapo to experience incentives for preserving their culture and defending their traditional lands. He also knew that if he was to succeed in uniting 35-50 villages across 11 million hectares of overgrown tropical forest without the assistance of wifi and Google Maps he was going to need to outside help.

And that is how Barbara Zimmerman, Director of the Kayapo Project, found herself in 2008 on a plane to the 8th World Wilderness Congress in Anchorage, Alaska seated beside Megaron, a Kayapo leader in full tribal regalia.

Megaron would address an audience of 1,500 professional conservationists from all over the world, and share with them an invitation to help his people.

Through the help of the WILD Foundation and its World Wilderness Congresses (WWC), the International Conservation Fund of Canada (ICFC), and the Environmental Defense Fund, the Kayapo have been able to draw the attention and resources of outside NGOs, demonstrating that with support, Indigenous people are the best stewards of the land, and the strongest line of defense against deforestation.

So what are these groups doing on a day-to-day basis to assist the Kayapo? Tune in next week to find out.

The Kayapo Project remains effective because of the generous support of its partners and sponsors including:

Your help bringing greater awareness to the efforts of the Indigenous peoples who are defending the rainforests for the benefit of all life on Earth is essential. Please consider sharing the image below with your networks on social media. Thank you!