The current crisis on Lake St Lucia, the pearl of iSimangaliso Wetland Park (a UN World Heritage Area) as it is now known, began a long time ago, probably when the great Zulu king Shaka rose to power in the 1800’s and began increasing the cattle herds in the Imfolozi catchments. The concomitant soil erosion apart from the natural erosion with the great floods of that period led to a gradual silting of the Lake. However, when I first

visited Imfolozi Game Reserve in 1952 the White Imfolozi River was dry, but there were pools 20 feet deep in the Black Imfolozi. I remember this clearly because I was fishing for barbel in the pools below Tumbu and measured the depth with my fishing line. The gradual erosion was, however, nothing compared to the terrible acceleration of erosion when the Imfolozi flats were canalized to create sugar farms, first after the 1914 – 18 war and then after the 1939 – 45 war. The land was handed out to ex-soldiers. Dr Hugh Bennett, the famous soil conservation man who warned President Franklin Roosevelt about the dust bowl, visited the area with T.C. Robertson, Director of the Veld Trust, and told T.C. that the soil was so fertile it could be used for fertilizer!

My own memory of the Lake begins when my father went fishing there in the 1930’s and spoke of it being a fisherman’s paradise. I first saw the Lake in 1947, stayed at the Anglers Hotel and did a boat trip up the narrows and down to the mouth which was open to the sea and the Imfolozi flowed into it. Fishing was superb, but there were serious views being expressed about the soil coming into the lake. In 1952 my first station, after a few days tutelage under Peter Potter, the chief Conservator, was St Lucia estuary, where I relieved Ranger Erasmus.

The drive from Mtubatuba to the estuary was along a dirt road and for many miles the forest canopy, the Dukuduku, was just overhead. In the open grasslands there were small vleis with geese and ducks. We crossed over the Estuary by pont with a group of Zulus pulling on the ropes and singing in magnificent unison. I lived in the Anglers Hotel at a cost of £18-0-0 a month, which left me two pounds – it was enough. 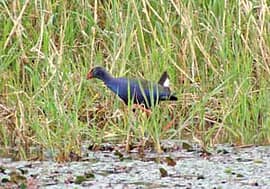 Eric Yeld and his family lived in the Anglers too – he had recently been appointed as Engineer in charge of the reclamation, by the Natal Provincial Administration. We became firm friends – from him I learned about the decision to begin diverting the Imfolozi into the sea to avoid any more silt being deposited. But it was already too late, and the problem was being tackled from the wrong end. Other problems were also looming.

Afforestation was planned for the Eastern and Western shores and all the other rivers entering the lake were under threat; the Mkuze, Imfolozi, Hluhluwe and Mpate. Afforestation also threatened the fresh water from the dunes on the Eastern shores. In the late 1950’s, early 1960’s, salinity reached drastic heights. This was relieved by the huge floods in 1957 and 1963, but only 6 years later the salinity again had risen so dramatically that crocodiles at the mouth of the Mkuze river were dying due to the lack of fresh water.

In 1969 after 17 years in Zululand I had been transferred much against my will to Head Office in Pietermaritzburg. Warden Nick van Niekerk, other Rangers on the Lake, as well as Tony Pooley, a world expert on crocodiles, were deeply concerned about the rapidly deteriorating situation and urged me to take action to save the remaining crocodiles in the Mkuze. At that time, the only flow of fresh water came from the Mkazama stream on the Eastern shores opposite Charter’s Creek. 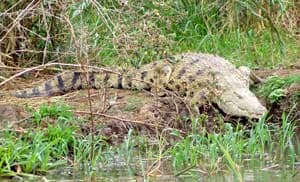 The Newspapers began publishing articles leaked to them by the staff. One senior officer called me into his office and said, “These bloody newspapers are a menace!” I replied, “On the contrary, without them most of the parks in Zululand would have been de-proclaimed. They are Wildlife Conservation’s biggest allies.” And let me say, remain so to this day. Nick van Niekerk, the Lake Warden, gave an excellent interview with Hugh Carruthers of the Rand Daily Mail on 21st January 1970. Some of the statements he made, like: – “Being weary of begging farmers and foresters to allow a stronger flow of water through their lands…” enraged Head Office Seniors and I was called in yet again and told to “curb my staff.” I refused to do this and said, ” I encouraged Nick van Niekerk.” I was then told if I persisted my job would be on the line. I knew I had seriously antagonized the bureaucratic mindset, but at the time I knew that what we were doing was right. The Parks were critically important, not only for the wildlife, but for humanity too. The revelations experienced on the Wilderness trails were proof of the uplifting spiritual value of the contact with the land and the wildlife.

In April 1970 there was a headline that St Lucia would be dead in a few months. This led to a furious Chairman of the Parks Board, Mr. Wood, making a statement in which, inter-alia, he said that he, “did not accept the Lake would soon be dead.” But the Northern section was already dead, with more crocodiles dying daily, and the stench of death was overpowering. Newspaper articles appeared almost daily about the lake and the salinity, and letters were written to the press urging more practical solutions. In February 1970 the Government announced that it had assumed responsibility for the Lake. The minister, S.P. Botha, said he had become very concerned that Lake St Lucia had again become very salty. 1970 had been proclaimed Water Year and the minister wanted to show that he was doing something. However, the Government was spending huge sums of money on the Verwoerd Dam (Gariep Dam) and almost nothing on Lake St Lucia – in fact more afforestation was going on; exacerbating an already bad situation.

In 1966 Minister Jim Fouche had also announced that he would not let St Lucia die. This was after a report by the Kriel Commission, but again nothing had happened. By September 1970 the situation had become absolutely desperate. After consulting with Nick Steele, Nick van Niekerk and Tony Pooley, I approached Brigadier James Blatt; Officer Commanding Natal Command, and explained that we urgently needed a big helicopter to airlift the crocodiles from the Mkuze mouth to the Mkazama stream – a distance of probably 21 kilometres. Brigadier Blatt was immediately sympathetic and said he would make a Super Frelon helicopter available. By the morning of the 4th September 1970 the Super Frelon was on its way to the top end of the Lake. 30 White and Black rangers volunteered to work round the clock in an untiring bid to save the crocodiles. The saurians were netted and then dragged to the shore. This was extremely dangerous and the rangers were constantly at risk of losing their lives. I must emphasize that the crocodiles were not drugged, but had Hessian draped over their heads in an effort to subdue them. Some of the crocodiles weighed 1,000 pounds (454kg). They were wrapped in canvas and then winched to the lower part of the helicopter and flown to the fresh water stream, where rangers from St Lucia were waiting to offload and release. It was a spectacular effort by a phenomenal group of men to save the unfortunate crocodiles; which were so exhausted that they had to be moved physically to the stream. After sliding into the fresh water, the huge reptiles drank their fill and became visibly bloated before slowly swimming off. Over 50 large, mature and breeding crocodiles were saved. I remember Tony Pooley telling me that this breeding stock was very important for the survival of the crocodiles in the Lake St Lucia system. It had been a desperate time, but as always the Natal Parks Board staff, both Black and White rangers, rose magnificently to the task. But even more serious dangers lay ahead.

In 1989, Richards Bay Minerals announced that the dunes on the Eastern shores were going to be mined. We who knew the Lake, realized that damage of any kind to the dunes would eliminate the last fresh water supply. Operation Crocodile had shown us the importance of the fresh water coming from the dunes. 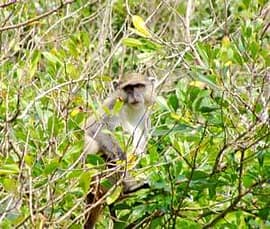 After a long, vicious campaign the battle to save the dunes was won. The next major battle was to remove the afforestation which was seriously affecting the flow of water into the adjoining pans of the Lake, which both hippo and crocodile used. This battle too, has now been won thanks to Andrew Zaloumis and his relentless efforts. It is a great joy to see the fresh water pans re-appearing on the eastern shores, and the game increasing. Hopefully, this extraordinary world Heritage site will receive the attention it so richly deserves from the new Government. The most urgent problem facing South Africa is the environment and this must take precedence over less important political squabbles.

View a slideshow of images from the crocodile rescue>>