Today, we celebrate Nelson Mandela’s 93rd birthday.  It is truly a day of celebration and one that is especially important here at WILD because of our strong roots and continued work in South Africa.  Mandela’s introduction to Dr. Ian Player’s Zulu Wilderness: Shadow and Soul (special edition) is a fitting way to honor today: “This book is Ian Player’s tribute to Makhubu Ntombela and the remarkable friendship which grew in the wild.  Their relationship and their commitment not only to each other but also to the conservation of wilderness is a shining example of the spirit of the people of this country.”

Here is a brief excerpt from the book, written by Ian Player:

“This is a story of my friendship with Qumbu Magqubu Ntombela, a game guard who spent nearly all his life in the service of wildlife conservation….. 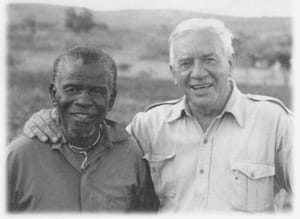 Magqubu and I greeted each other, and there was an unconscious recognition of our respective inner beings.  Magqubu had the bearing of a warrior and every movement he made emphasized his independence.  He was five feet six, yet his presence demanded attention.  He was respectful, attentive, and obedient to Willie Foster (his boss), but was his own man.  I thought to myself that this was as it had been at the time of the old Zulu order.  Magqubu was fifty-two and had already worked in the game reserves for thirty-eight years.  I was twenty-five and had just begun my career.  Something stirred within me and I knew that this man would be important in my life.  A friendship began that eventually superseded color, culture, religion, and every other barrier that can exist between men, but the journey was not without its difficulties.  I was fortunate to be the recipient of an oral history told to me by Magqubu Ntombela.  Our friendship was one of the most important in my life and Magqubu seemed an ageless person to me.  He was always there, waiting to impart knowledge or tell a new story.  His energy was boundless, and his ability to deal with life and all its problems was enviable.  He was a guide and mentor on my long continuous journey toward self-understanding.

The friendship between Magqubu and Ian set the stage for The WILD Foundation, the World Wilderness Congress and all of the organizations within The Wilderness Network.  The theme of Zulu Wilderness is the same theme which guides our work for wilderness and people world-wide: connecting people to wild-nature brings them closer to each other, breaks down both internal and external barriers and inspires greater kindness to each other and the planet.

Honoring the friendship of Ian and Magqubu seems an appropriate thing to do on Mandela’s birthday, formally recognized as Mandela Day by the United Nations — a day to celebrate the idea that each individual has the power to transform the world, the ability to make an impact.