KAZA – A Major Step for Transboundary Conservation in Africa

A major step for wild nature and people in Southern Africa occurred on 18 August 2011 at the summit of the Southern African Development Community (SADC). At the closing session, the presidents of Angola, Zambia, Namibia, Zimbabwe and Botswana signed the treaty that officially recognizes the Kavango-Zambezi Transfrontier Conservation Area (KAZA). In planning since the concept was agreed in 2003, KAZA is now officially the world’s largest conservation area involving a mosaic of different resource protection areas, including National Parks, Game Reserves, Forest Reserves, Conservancies, Game/Wildlife, Management Areas and Communal lands. 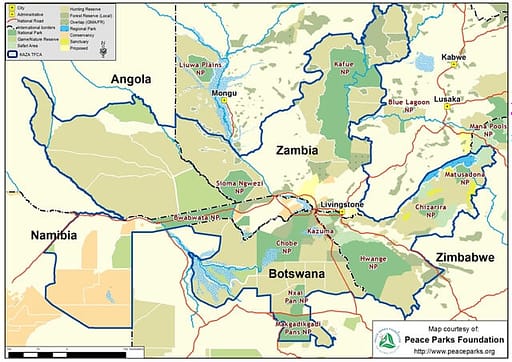 At 444,000 square kms, KAZA is roughly the size of Sweden and encompasses some of the most outstanding wilderness and wildlife in Africa, including the largest concentration of African elephant in the world. The concept and plan has been driven by WILD’s close collaborator, the Peace Parks Foundation, based in Stellenbosch in South Africa’s Western Cape.  Learn more about this great step forward for transboundary conservation in Africa >