Darren Potgieter met Mike Fay in 2003, while he was researching digital aerial photography applications.  Darren’s skills as pilot and his knowledge of mapping and environmental issues made him the perfect fit for the Zakouma aerial elephant protection program, a program run by the Wildlife Conservation Society, in collaboration with many organizations including The WILD Foundation.

The program launched in response to Fay’s discovery in August 2006 of over 100 elephants slaughtered directly outside of Zakouma National Park.  Seeing a need for urgent action, The WILD Foundation worked with WCS to provide a suitable aircraft to begin aerial surveillance to deter and detain poachers.

Poaching primarily occurs in the wet season, when elephants journey outside of park boundaries in search of food.  Prior to starting the aerial surveillance program, park guards, though well trained and equipped, were often unable to respond to poaching issues because the park is so vast and transportation and communications systems were lacking.  To make matters more complicated, Zakouma is located just 260 kilometers west of the ongoing conflict hot-spot of Darfur.

Recent reports from Darren, and a recent study by Fay, tell that the surveillance has been successful.  Patrolling at least 40 hours per month, Darren is able to report potential poaching camps to park guards, which allows them to effectively target poachers in this vast region.  During the 2008 wet season, no recent carcasses were observed (compared to 106 in the previous year), and since October, only 15 poaching incidents have been reported (compared to 56 during the same period last year).  The photo below shows how the aerial surveillance tracks carcasses. 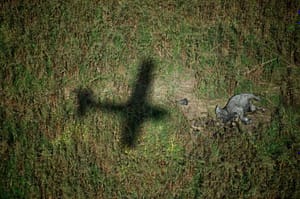