My journey “In the Tracks of Giants” – A busy day!

It’s only day 3 (or day 4??).  I have no idea and think I will soon stop trying to count.  Today, I woke up just in time to hear some of the roosters crowing at Isandlwana.  A quick bit of yoga on the patio before meeting Elizabeth Dhalmini, who runs our programs in the village.  She updated Vance and I on the gardens, schools, craft programs, dancers, soccer team and the organic orchard. So much has changed in the village from when WILD first began working there in 1999!  Elizabeth notices now that people are moving to the village, because they see the good things happening here. 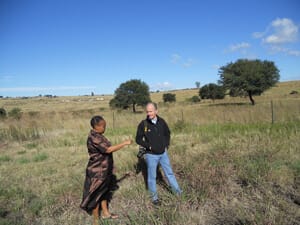 After breakfast, we took a drive to the orchard and talked about how to re-invigorate the program after the recent fire.  As we walked through the orchard, three young boys walked by, curiously watching us.  Elizabeth said that they are members of the soccer team and watch over the orchard.  Once they saw we were with ‘Ms. D’ (as Elizabeth is called), they waived and continued walking! 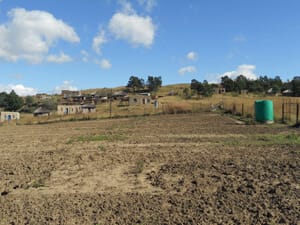 Next, we drove through the village – which stretches for a few miles in each direction – to visit one of the successful gardens.  Elizabeth said that because of recent rains, many of the gardens were too wet but this one was growing well.  After our quick tour, we said good-bye to Elizabeth, Pat and others at the Lodge and drove toward the coast.

We stopped at Salt Rock to have lunch with Paul Dutton and his partner Jane.  Paul is one of the great conservation legends — good friends with Ian Player and a very well respected and accomplished conservationist throughout Southern Africa.  His current projects include a conservation management plan for a small island off of the western coast of Africa and the resurrection of an old ‘cub’ airplane that he flew for many years on various conservation projects.

After lunch, we continued on to the Durban airport, where we met with Samantha Terblanche who works on programming for Isandlwana and a colleague of hers who works with Africa Ignite. We discussed some wonderful ideas to generate sustainable income for the village through craft-work.  Good ideas, even though the meeting was quick!

A short flight to Port Elizabeth and then a great dinner with Vance — continuing to learn from his seemingly infinite knowledge about South Africa, conservation and…well, life.   Tomorrow we meet with Andrew Muir and the staff at the Wilderness Foundation.  G’nite!