My Journey to Mali 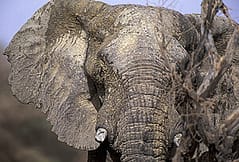 I first came to Mali in early 2006 on the invitation of a good friend of mine, Jake Wall, a research scientist with Save the Elephants Foundation. Jake and I had grown up together in Kenya, sharing many a great adventure across Africa and developing a deep passion for wildlife and wild places along the way. When he asked me to join the Save the Elephants (STE) / WILD expedition to the Gourma in February 2006 I jumped at the chance to work with Mali’s fabled desert elephants. At the time I was living in nearby Guinea where I was working as a cartographer and GIS consultant teaching Guinean government foresters how to use GIS as a management tool for protected forests in the Fouta Djallon highlands.

West Africa’s beautiful landscapes and forgotten pockets of wilderness quickly seduced me and I stayed in Guinea for more than four years. During this time I explored many of the region’s more remote areas, traveling to Senegal, Mali, Mauritania, Sierra Leone, and the Gambia in search of wild places and the animals I had heard once lived there. In many cases what I found were empty forests and savannahs that were nearly devoid of wildlife. Many places had been hunted out decades or even centuries before and once ubiquitous animals like elephants, hyenas, lions, and even antelope were now mythical creatures of lore that few people under the age of 50 had ever seen. The few wild animals that I did encounter were terrified, fleeting blurs in the night. Having grown up in East Africa, where encounters with wildlife were an almost daily affair, the empty forests and savannahs of West Africa profoundly affected me. The distress over what had been lost only strengthened my resolve to preserve what remained and I have stayed actively involved in conservation in the region ever since.

Although the future of wilderness and wildlife in many parts of West Africa is bleak it is certainly not hopeless. The highland forests of Guinea still shelter some of the largest

populations of western chimpanzee on the continent and Niokolo-Koba National Park in Senegal still stands out as a bastion of biodiversity with its abundant wildlife and intact ecosystems. Pygmy hippos and forest elephants, once feared to have been extirpated during decades of civil war, have clung to survival in remote corners of Sierra Leone and Liberia. But perhaps the most inspiring story of survival is that of Mali’s tenacious desert elephants who still survive at the edges of the Sahara desert in some of the harshest conditions on the continent. Protecting these resilient animals and their habitat will require a sizeable invested of time, money, and diplomacy but I am convinced it must be done to ensure the long-term environmental stability of the region.