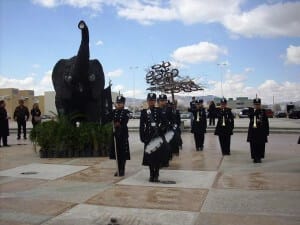 This past week, Nomhubulwane went on parade through Juarez, Mexico, a city with a violent reputation.  There was a lively parade with music, dancing and general good spirits and much celebration and discussion along with her visit.

Juarez, Mexico is just a short drive from El Paso, Texas — but there are two checkpoints to get through the US, dogs sniffing for arms and drugs and a constant line at the border-crossing.  The weekend before Nomkhubulwane arrived, 20 people were killed including an 18 month old.  This is clearly a city in need of some positive energy, inspiration and citizen stewardship — which is exactly what Nomkhubulwane brought.

On parade day, there was much celebration.  Many local sponsors supported hosting Nomkhubulwane – an amazing out-pouring of support considering that 10,000 businesses closed in the past year due to the economic downturn and violence.  There were speeches by local leaders, environmental experts and academic role-models.  Music poured from African drums and a youth marching band in full uniforms and many were dancing traditional Mexican folk dances and other free-spirited dancing.

For the next 2 weeks, there will be workshops at the Cultural Center, where Nomkhubulwane will be hosted… local support person Katie Updike commented: “Art can bring to the surface the ability of citizens to take action, rather than government accords and treaties.  This tour is about citizen stewardship…in many ways.  Being able for Juarenses to participate in a world movement and feel connected to South Africa, El Paso, the world, is perhaps the biggest part of the elephant in our room.  Yes, there is the ecological message underlying it all, but in the hierarchy of needs, this City si feeling so isolated and sad.”

Nomkhubulwane is sparking some interesting conversations in Juarez, such as how used tires (like those used to create the elephant) can be used in municipal projects – as proposed by Gonzalo Bravo, manager of communications with the Border Environment Cooperation Commission (BECC) in his presentation on Thursday.  We’ve heard that over 3,000 people attended the welcoming parade and the environmental lectures throughout the week!  Blogger David Sokolec posted some great photos of the celebrations.

On March 12th, Nomkhubulwane will travel to El Paso and be greeted with a picnic at the Chamizal National Memorial and a free art & nature workshop at the Los Paisanos Gallery on the 13th.  The following day, she will travel to the El Paso Zoo to help open the zoo’s new Africa exhibit.  On 26 March, she will move on, continuing her tour of North America.