At a time when the global biodiversity crisis and climate change persist, World Heritage Sites (areas of special importance as recognized by UNESCO of the United Nations) represent an international model that incessantly reminds us about the wonder and uniqueness of our living planet and our obligation to preserve it. As one of the few site-based global environmental agreements, the World Heritage Convention is a key international instrument to highlight the importance of wilderness areas.

To promote the importance and demonstrate the vitality of these sites, the WILD Foundation has again partnered with our long-term collaborators, CEMEX and Conservation International, and with UNESCO and the International Union for the Conservation of Nature (IUCN), to publish the informative, highly illustrated book, “Earth’s Legacy: Natural World Heritage“. This is the third volume of CEMEX’s “Nature Series” which builds on the tradition of the original, 20-volume “Conservation Series” that began 1993. “Earth’s Legacy” includes fabulous images by some of the most respected conservation photographers in the world, as well as conservation-oriented descriptions of more than 100 amazing natural sites which are included on the “World Heritage Register.” Published bi-lingual (English-Spanish), the book is written by World Heritage experts, including Cyril Kormos (WILD Foundation Vice President for Policy / IUCN), Tim Badman (IUCN), Russ Mittermeier (Conservation International / IUCN) and Bastian Bertzky (IUCN) as lead authors, and edited by Cristina Goettsch Mittermeier (WILD Foundation Board of Directors and founder/past President of the International League of Conservation Photographers). 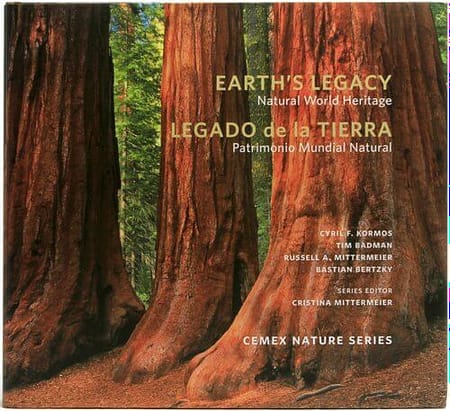 “World Heritage Areas include some of the most spectacular wilderness areas remaining on earth. We must protect them for their own values, as well as to underscore their value for a healthy, sane and prosperous human society,” said WILD Foundation President, Vance Martin, in a previous announcement about the book.

“CEMEX has demonstrated its belief in conservation for a quarter-century by producing this outstanding book series, of which this wonderful volume on World Heritage is the latest contribution”, says Russ Mittermeier, Executive Vice-Chair of Conservation International and former Vice-President of IUCN. “They should be commended for having locked in their commitment to the world’s highest priority natural areas through their very strong statement on the inviolate nature of UNESCO World Heritage sites.”

“World Heritage sites do not belong solely to one people or one country, but to humanity as a whole, and protecting them is a responsibility we collectively share now and in times to come,” says Irina Bokova, Director General of UNESCO. “We welcome CEMEX’s commitment as recognition that we must all work together to ensure that the world’s most outstanding places flourish in a sustainable manner for the benefit of future generations.”