Protecting Wilderness Is Protecting Its Inhabitants 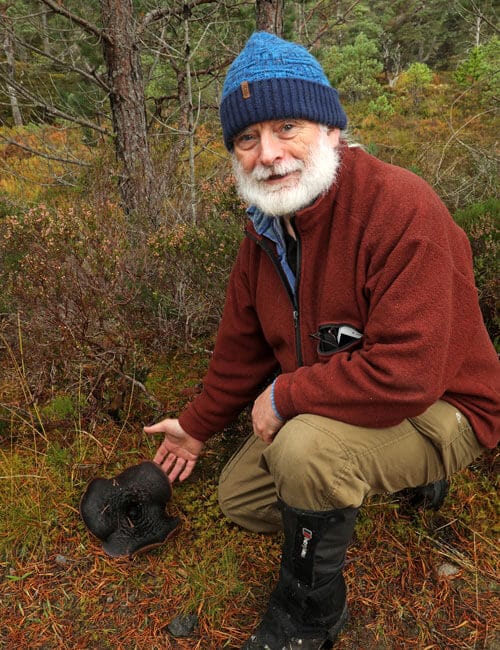 Welcome to our new series: Protecting wilderness is protecting its inhabitants. We’re taking you on an exploration of the different species that hide within wilderness areas and that are crucial to the health of Earth’s natural world.

For our first conversation in this series, we asked Alan Watson Featherstone, a public speaker, conservationist, nature photographer and writer based in the community of Findhorn in northeastern Scotland, about the fungal kingdom, his passion for them, their importance to nature and how we can all protect them.

What is the difference between the word “Fungi” and “Mushroom”?

Mushrooms are the fruiting bodies or reproductive structures that some fungi (but not all) have. The main part of most fungi is a network of (generally) white threads within their substrate (soil, or dead wood etc) that are called hyphae. These exist all year round, and form what is called a mycelium – an interconnected network of the threads, through which the fungus feeds – and exchanges nutrients with other organisms such as trees for those fungi that engage in mycorrhizal relationships. 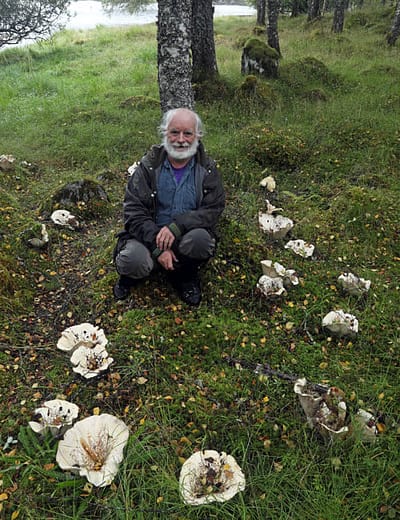 At certain times of the year – late summer and autumn for the majority of species – the fungi produce the above ground structures we call mushrooms, which release the spores that enable the fungus to reproduce. Some species of fungi produce hard and persistent fruiting bodies, such as the bracket fungi on dead birch trees, that can persist for many years, but the majority of mushrooms are ephemeral, lasting only for a few days.

Why this passion for the fungal kingdom?

I’m fascinated by the beauty and diversity of forms within the fungal kingdom, both in terms of their sometimes spectacular fruiting bodies, and also their relationships with other organisms, which range from symbiotic to parasitic and also include the remarkably deeply integrated partnership with algae (and in some cases bacteria as well) to form lichens. There, the fungi are so intimately interwoven with, and interdependent on, their partners that the compound organism (ie. the lichen) has only one scientific name, not two.

Fungi are crucial and fundamental components of many ecosystems and their functions and services are vital and essential to the proper functioning of those ecosystems.

For example, many fungi break down dead plant material, and are in effect nature’s garbage collectors and recyclers – without fungi every ecosystem would be swamped by dead organic material that would accumulate without decomposing. 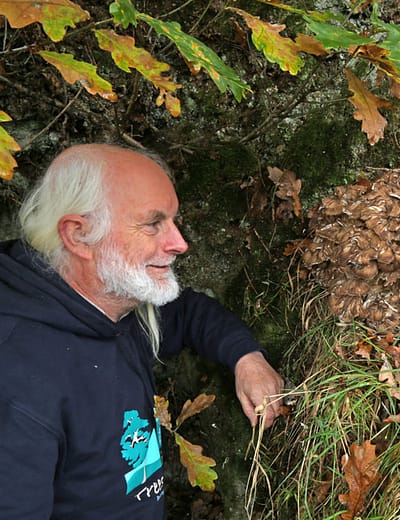 The presence of fungi are also essential for much rewilding work. For example, it is well-documented that trees that are planted as part of restoration work for degraded ecosystems grow much better and healthier when their mycorrhizal partners (ie. fungi) are present in the soil where they are growing. The fungal hyphae wrap around the trees’ root hairs and a mutually-beneficial exchange of nutrients takes place. By providing minerals and other nutrients the fungi obtain from the soil to the trees, they aid the trees’ growth, and in return the fungi receive sugars and carbohydrates that the trees produce through photosynthesis. As fungi possess no chlorophyll, they are unable to harness the sun’s energy directly themselves. This cooperation between trees and fungi is integral and essential to forest ecosystems all over the world. Other fungi have similar mutually-beneficial relationships with grasses in grassland ecosystems etc.

But how to protect them?

To protect certain fungal species people can do the following: if picking edible fungi for eating always leave some behind still in the soil, so that they can release their spores and enable the fungi to spread; leave dead branches and dead wood in the forest instead of ‘clearing them away’.

Dead wood is a vital resource and food for many fungal species, and they recycle the nutrients in the dead wood, keeping them within the ecosystem, instead of them being permanently lost, if the wood is removed for burning or just to ‘tidy the place up.’

Did you enjoy this first conversation of the series? Let us know in the comments if there are any particular subject matters you would like us to discuss.