Return of the Auroch to Central Europe

The main icon for WILD10 is the auroch, the large, wild bovine herbivore that roamed Europe for many thousands of years, shaping the landscape,  until it was extirpated almost 400 years ago. The artistic impression we use (created by Jaime Rojo) is from one of the many cave paintings found in Spain and France, superimposed with the human hand.  We chose this symbol because just as the wildness returning in Europe is the main reason for WILD10 to convene there, modern human interaction with breeding of primitive cattle also hopes to bring back the auroch…the process of which we believe is a symbol of man and nature working together in a new way, to re-wild, to protect intact European wilderness,  and to help create a new conservation vision where humankind and wildness can coexist in a modern world….in short, to Make the World a Wilder Place! 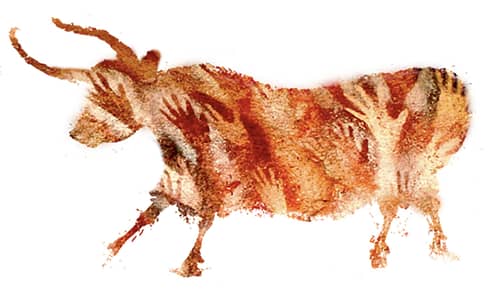 For hundreds of thousands of years the Auroch was a part of European nature. Since the death of the last aurochs in 1627 in the Jaktorow game preserve in Poland, it seemed that Europe has lost this key species forever. The history is about to change, though. The European Wildlife organization in cooperation with the Dutch Taurus Foundation is preparing a project aiming to return the Aurochs to the mountains of Central Europe.

The project is part of a program of the European Centre of Biodiversity whose aim is to protect endangered species and to reintroduce the ones that have become extinct in many places – European bisons, wild cats or wild bees. And the aurochs, of course.

At present, the Dutch Taurus Foundation is preparing two herds that will form the base for semi-wild breeding herds of aurochs in the mountains of the Czech Republic. The aurochs are brought back by cross-breeding the most suitable primitive breeds of cattle from the whole of Europe within the Tauros Programme.

Once the aurochs roamed over vast areas of Europe, Northern Africa and Asia. It was an impressive animal, perfectly adapted to the diversity of landscapes it inhabited. The Aurochs ranged from open savannah-like landscapes to marshes, forests and lower mountains and was able to fill in most ecological niches encountered in Europe. 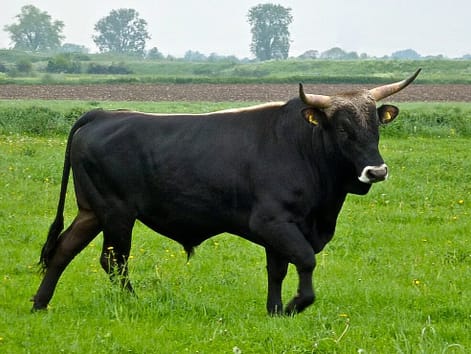 Grown up Aurochs could hold their ground against big predators such as wolves. The long and thick horns acted as a powerful defense against any outside threat. The animal was up to two meters high and due to its long legs and slender build it was an agile animal.

The body shape of the auroch was, like in other wild bovines, athletic and, especially in bulls, showed a strongly expressed neck- and shoulder musculature. Even in carrying cows, the udder was small and hardly visible from the side; this feature is similar to that of other wild bovines.

> View this short video of a bull auroch