Return of the Lynx

In my undergrad ecology class at SUNY at Buffalo we studied predator/prey cycles and a well-studied phenomena of ecology is the predator prey cycle of the Canada lynx and Snowshoe hare.  I worked in a struggling record store while in college that also had used books for sale.  I would flip through the dusty, dank books to find any gems and came across a wildlife book.  When I flipped through it and landed on this photo, my heart stopped and I was mesmerized by the intensity of survival of this moment: 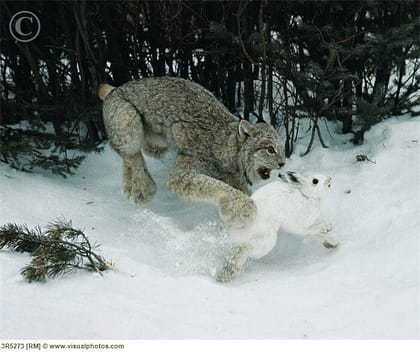 The Canada lynx (not to be confused with their cousin the Bobcat, which is smaller and has different features) once occupied 16 of the lower 48 states including New York, Pennsylvania, Michigan, and Wisconsin.  It was listed as threatened in the contiguous United States under the Endangered Species Act by the U.S. Fish and Wildlife Service on April 21, 2000.

Can you guess why the lynx is threatened?  If you guessed habitat fragmentation and destruction, over-trapping and poisoning, and death by car collisions you’re on the right track.

The Colorado Division of Wildlife reported the last known lynx in Colorado was killed in 1973.  The CDOW started a lynx reintroduction program in 1999 and since then, over 200 lynx have been released in the San Juan mountains.  The reintroduction has seen great progress but there have been many challenges and lessons.  As the lynx survive and reproduce, they travel to establish suitable territory.  Traveling long distances means crossing our many roads and highways, and we all know how scary this is for drivers and for wildlife.   The worst of these crossings is I-70 that cuts through the Rockies and the heart of National Forest lands in Colorado.  Several lynx as well as moose, bear, elk, fox, and people have been killed near Vail on I-70.

But there’s hope!   We here at WILD are working with Rocky Mountain Wild, CDOT, ARC, the Federal Highway Administration, the Colorado Division of Parks and Wildlife, the US Forest Service, and the US Fish and Wildlife Service to build an overpass specifically for wildlife to cross over I-70.

The I-70 Wildlife Crossing will show how we can incorporate wildlife crossings into our interstate highway system and will establish Colorado’s leadership in protecting our natural heritage all while reducing collisions with wildlife and connecting vital ecological areas.

We need your help!  Stay tuned for more I-70 Wildlife Crossing news and events, and share this blog now!