Solar lights up the Amazon

At our 8th World Wilderness Congress in 2005 (Anchorage, Alaska), WILD launched the Native Lands and Wilderness Council to ensure the inclusion of native leaders in mainstream wildlands conservation. Kayapo spokepersons participated in and have since become a valued part of this Council which is now driven entirely by Indigenous stewards, and The WILD Foundation continues as a collaborative partner. Following the 8th WWC, WILD’s president was then invited to a meeting of representatives from all of the Kayapo villages. We formed a close working relationship with the International Conservation Fund of Canada (long-term supporter of the Kayapo) to help strengthen their capacity for territorial protection and sustainable resource management, plus formed a substantive partnership on our Mali Elephant Project– which works with local, traditional communities in west Africa to save habitat and wildlife. 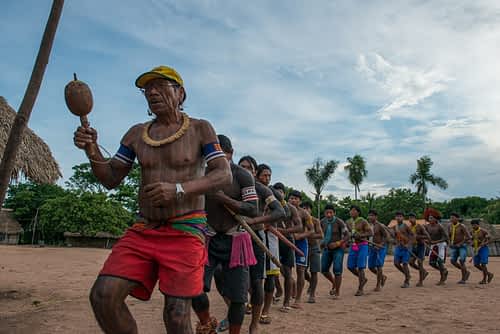 No conservation effort in the tropics has been more successful than that of the Kayapo Indians of Brazil. They’ve achieved more for the preservation of tropical forest than any other group or organizations on earth. WILD continues to support these true guardians of the rainforest by strengthening their capacity for territorial protection and sustainable resource management. We recently became aware of PURE Energies, a California-based solar energy company that traveled to the Amazon rainforest to learn from and contribute to the incredible conservation efforts of the Kayapo community. Following their journey, the team created a series of short videos, photo collections and blogs about their experience with the Kayapo people, and we’re happy to share their story with you. WILD admires companies involved with such environmentally-conscious work that also strive to improve causes like that of the Kayapo people. 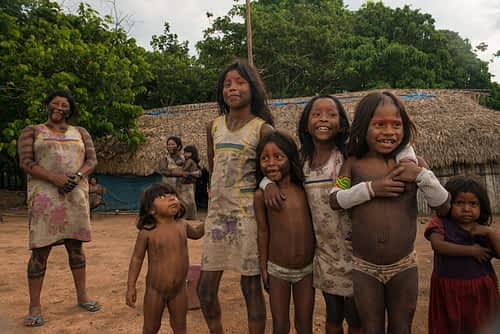 PURE Energies designs and installs residential solar systems in Ontario, Canada and in 35 states across the U.S. They don’t actually build any particular technology. Rather, they have developed the most comprehensive online marketplace in residential solar. Through its proprietary platform, PURE Energies delivers a time-saving, complete analysis of the benefits of solar energy for homeowners- free of charge. Doing so, PURE Energies has become the trusted advisor in the North American solar energy market.

The company’s CEO, Zbigniew Barwicz, is all about sustainable living, so much so that one day he decided to take a team of people to the Amazon to see how the Kayapo, an indigenous people who have existed in the rainforest for eons – and with no technology as we know it – live sustainably. What could the techie Californians learn from the Kayapo – and vice versa?

As it turns out, the answer is: lots. The techie team, led by the International Conservation Fund of Canada, spent two weeks living alongside the indigenous Kayapo. You can see all about their journey here. They participated in their traditions, explored the Amazon basin, and learned how the Kayapo live in harmony with the world around them.

PURE Energies’ CEO Barwicz wanted to see what was going on for himself, and help if he could.

The adventure was pretty eye opening – check out their day by day adventures on their website. The Kayapo people effectively protect an area of rainforest that is bigger than more than half of the countries in the world and equal to the size of Virginia. Every day, their land is threatened by loggers, ranchers and miners. They respond by living in the sustainable way they have lived for hundreds of years. But they’ve also become savvy about tapping into media channels to help raise awareness about the threats they face, and that the globe faces, if their forests are destroyed. They’ve formed non-governmental organizations (NGOs) to obtain national and international conservation and development support for protecting their lands. And they’re developing non-timber forest products to generate modest income they use to purchase some modern-day supplies.

To help, PURE Energies distributed Goal Zero solar powered lanterns to the Kayapo Tribe in Kendjam, Brazil. The lanterns will be used to build their social enterprises, to help deliver babies at night, and for nighttime social gatherings.

The PURE Energies expedition team, meanwhile, were amazed at what they learned about living simply and without fire in the Amazonian basin. They were so inspired, they will be releasing a 5-part video series that touches on the topics of independence, courage, and leadership – all traits they observed among the Kayapo.

“For PURE, independence means giving homeowners the decision to take control of their energy bill and to make their own choices. Gone are the days where energy is without options,” said CEO Barwicz. “We are entering a new era, where homeowners have the potential to generate and directly use their own power. Through this trip, we will learn the truest form of independence and convey those learnings to the homeowners of America.”

See more of this great adventure. The series will airing this week and continue until January via www.pureenergies.com/us/kayapo. Watch the first video below!