Since the day The WILD Foundation was born in the African wilderness, we’ve dedicated a tremendous amount of time and energy to protecting Africa’s magnificent rhinos. Our founder Dr Ian Player is well known as being the initiator and team leader of the innovative and internationally acclaimed project ‘Operation Rhino’ in the late 1960′s. Through relocation, safe breeding groups were established elsewhere in the country and in the world. Operation Rhino successfully saved the southern white rhino from extinction and by 2010 there were over 17,000 white rhino in South Africa. 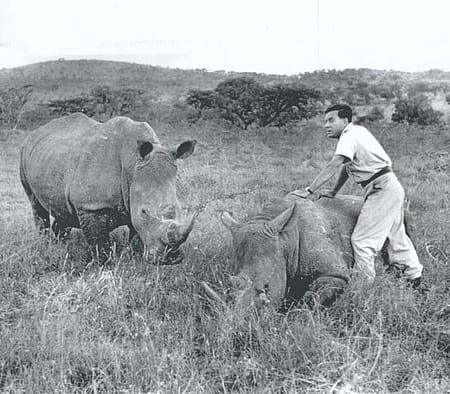 More recently with our Wilderness Network partners, we launched the Forever Wild Rhino Initiative to take urgent action on the steadily increasing levels of rhino poaching in South Africa. Through advocacy and awareness campaigns, the initiative supports conservation agencies and private game reserves in protecting their rhino as part of a functioning natural ecosystem. 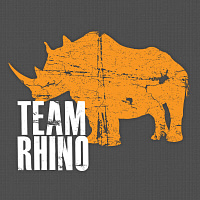 As rhino poaching has reached record-breaking levels in Africa in the past few years, much debate over controversial anti-poaching technology, tactics and policy has erupted, and many new rhino conservation groups have entered the fray — some more savory than others.

As with many nonprofit causes, missions can become fuzzy. Groups may begin to cannibalize each other’s efforts, and relationships can get hairy. Supporters are asked time and again to give money to what may feel like a losing game with no rules. In 2013, poachers slaughtered upwards of a thousand rhinos in South Africa alone, and 2014 is on track to be even worse.

All of this activity has left many rhino lovers and conservationists around the world wondering, “How can I join the fight? Who do I team up with?”

To unite rhino conservation efforts by established organizations around the globe on World Rhino Day and every day after, the International Rhino Foundation, Save the Rhino, Asian Rhino Project and The WILD Foundation are joining forces as Team Rhino. 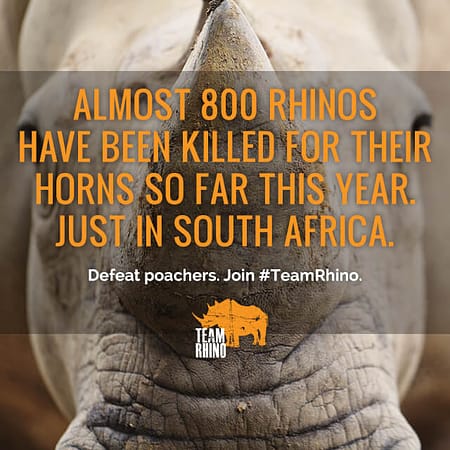 We understand that not everyone who cares about rhinos is in a position to donate thousands of dollars a year to conservation or lobby bigwigs within national governments’ environmental agencies or lend their prominent name to awareness campaigns by going on safari with media or exchange fire with ruthless poachers in the African bush.

That’s why we’ve formed Team Rhino — a massive effort to globalize support for saving the rhino from the grassroots up.

We’re forming a global roster and making local plays. From a rookie-level retweet to a major league donation, we’re recruiting members of Team Rhino to do whatever they can to stomp the competition from poachers and help rhinos win their fight for survival.

Part of the strength of a team is its members’ ability to motivate each other. We’ve teamed up with Dave Matthews and American Authors — as well as MVPs like Jack Hanna and Jeff Corwin — to call on fans around the world to learn more about the rhino’s fight and share with others.

Many people don’t know that rhinos are poached for their horn, which is sold on a black market controlled by international crime syndicates that support terrorism, high-stakes drugs and arms trade, and other human rights violations. They’re unaware that rhino horn is consumed primarily in China and Vietnam and used in traditional medicine or as a status symbol even though it is made of the same substance as our hair and fingernails. Many don’t know rhinos may become extinct in our lifetime if poaching numbers follow their current trend.

As a team, we can do much more than we can as individual players. Range countries like South Africa, Zimbabwe, Kenya and Swaziland need to hear our cheers on the side of the rhino. Consumer countries like Vietnam and China need to see our numbers as we call for penalties.

Like poachers and wildlife criminals, we must cross international and organizational boundaries to defeat them. Team Rhino is a global rallying cry to champion rhinos — a call to rush the field to declare victory for rhinos.