The Patience it Takes… 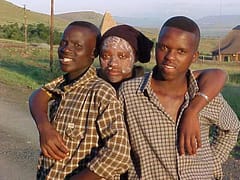 I tried to call you yesterday but you were in a meeting. I have asked Andre to stop at the school if he has a chance going by that way with the lodge camera and take some pictures for us. The builders tell me they would have finished the classroom by Friday. I am impressed as I only got materials on site last Thursday.

It was not without incident however……..On Wednesday I had a site meeting with our builder, Mr Ngobese, (one of Elizabeth’s neighbours), and his assistant at the school. Of course the Prinicipal was not there. Elizbeth was also running late as it was pension day in the village and I met with one of the teachers who gave us the key to the classroom and also arranged for a safe room for us to store our cement in. The school also had a wheelbarrow which I asked if we could use and she said not problem. So we locked all our equipment and the wheelbarrow in the store room.

Elizabeth arrived as we were finishing up and the Induna Joseph Ntshangase and the chairperson of the school governing body Mt Mthembu were with here. We all shook hands, I introduced them to the building team and explained what they would be doing and all was happy. 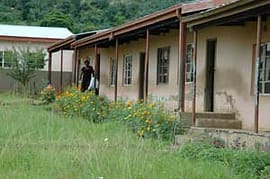 The next day the materials were delivered and the guys started working. Two days later I get a phone call from Elizabeth saying I need to please buy a wheelbarrow as the builders were told by Mr Mthembu, the chairperson of the school, that it was school property and they did not ask permission to use it. He gave Elizabeth a very hard time saying that no one got his permission to do this project and the first he heard of it was when we were at the school.

I then phoned him and we got into a heated argument. I advised him that we had been approached by the school to assist with the converting of the classroom and that the principal was aware of the project. He told me that the principal did not advise him so we had no right to be there. I then asked him to call a meeting with the parents association, the teachers and as many of the parents as possible, and that I would ask the Inkosi and the Department of Education Circuit Manager to attend as the Principal 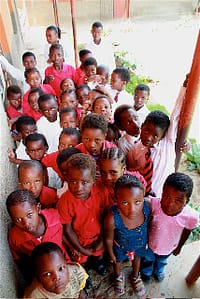 was on sick leave. I said that we would immediately stop what we were doing and take our materials to one of the other schools. I said that as they obviously dont want us there, we would stop all assistance to the school and focus on one of the others, but I would like the opportunity to tell the teachers and parents why we were withdrawing. He told me sure, he will arrange the meeting.

Half an hour later he phoned me back. Said that there had been a miscommunication and that it was all Elizabeth’s fault, (the cheek!)…..and that he has “consulted” with the members of the governing body and convinced them that the builders may use the wheelbarrow and that we now have permission to work at the school!

It drives me mad and is so indicative of the power-hungry African male that seems to have been appointed to every conceivable government post! Bring us some women!!!

Samantha Terblanche is the program coordinator for our Zulu Village Project in KwZulu Natal, South Africa.  Her current issue on building new classrooms to house computers for schools in the village, is a prime example of the patience and understanding of local cultural and social practices required for on-the-ground conservation work.  Carol Batrus tells many similiar stories in her memoir When Elephants Fly, about her work in dveloping several program in Zululand.