30 April, at the base camp in Purros, NW Namibia– We packed for the first 5 days which would be a Wilderness Leadership School type wilderness trail, or trek, that would launch TRACKS on the coast of Namibia, headed east for 5 months to the Indian Ocean.  Packed and ready to go, at 1000 hours we piled into the back-up vehicles for the drive through the rough, dune-dotted, arid landscape towards the coast. Vehicles were full, so I did the day on top of the land cruiser, jostling and bouncing for the entire 90 km. We stopped along the way for a spot of some local fun…dune-surfing…and to wake up the “roaring dunes,” a phenomenon described by Clive Crook in The Atlantic Magazine:

When you disturb the sand on one of those edges, it moves like a viscous liquid, pouring over the surface beneath. …The properties of a dune—including its angle of repose—turn on many different factors: wind, depth of material, size of the grains, shape of the grains, sorting of the grains (one size or many), dryness or dampness of the grains, and so forth.

When conditions are just right, something peculiar can happen: Sand can sing. Perhaps you are thinking I was in the dunes too long. (The grains! The grains!) No doubt some said the same of Marco Polo, after he wrote in The Travels about the singing sands of the Gobi Desert. Nothing but sand, he said, and yet he heard “the sounds of all kinds of musical instruments, and also of drums and the clash of arms.” He put it down to desert spirits. The people who know the Skeleton Coast talk of roaring dunes, not singing sands, but I think they are referring to the same thing. 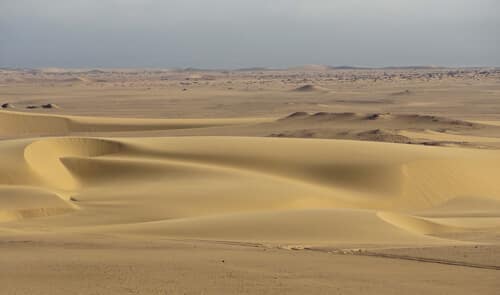 When the sand has exactly the right characteristics, and when the correctly constituted surface forms part of a bowl with the right acoustic properties, a small flow of disturbed sand can cause a sound that builds almost immediately to a noise like rolling thunder. The phenomenon has been recognized by physicists, but the precise causes are not entirely clear. Indeed, the leading researchers seem to have fallen out over it. An editor of Physics World reports that two of the foremost authorities on the matter, once friends, now “tend to avoid one another.”

We continued on towards the coast, arriving to “Rocky Point” at dusk; it was a cold ocean full of hundreds of Cape Fur seals fishing in the surf, with cormorants wheeling overhead.  It was cold after the desert heat (high 40’s F, 8 C) and we spent the evening scrounging for driftwood to cook dinner as we were decked out in woolen caps and fleece.  By the next afternoon we’d long for that coolness….

1 May, up and packing in the dark, working to the light of our headlamps.  Cold sea mist, everything damp and salty, we were ready for launch.

>Learn about the people behind the expedition 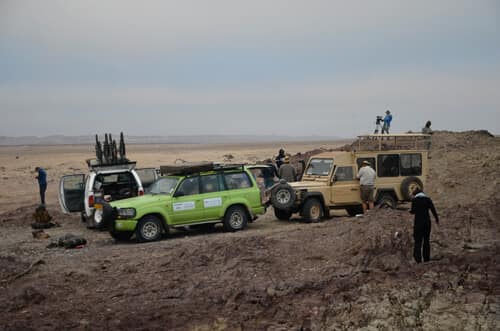