Hiking up the Horuseb Valley, across the Skeleton Coast, was a lifetime experience.  As we turned inland from the coast we saw our first elephant spoor (tracks), those of a large bull that had walked to the coast, turned, and ambled all the way back up the valley.  We started the expedition as promised….in the tracks of giants.

Namibia’s coastline is in continuous protected area status from the northern border with Angola to the southern border with South Africa.  Occasional 4 wheel drive vehicles traverse this area. However, we know of only one other person who has (willingly) hiked this 74 km stretch from the Atlantic Ocean to the dusty, desert, inland village of Purros in NW Namibia. That was Chris Bakkes (also with us on this trail) who did it with a back-up vehicle.  Our Tracks of Giants team of 11 people — plus one tenacious and remarkable Jack Russell terrier (“Tier”, or Tiger) – was unsupported, and each person toted 23kg (50 lb) backpacks. We had the necessary luxury of just one, pre-arranged cache of water deposited several days earlier along a particularly dry, 16 km segment of the river valley.  The fact that the water tasted like detergent from the ample cleansing in base camp of the 60 litre containers was little noticed. A rooibos teabag in my water bottle took care of that.

The cool, delicious Atlantic breeze quickly dissipated after we headed east from the mouth of the river.  The “river” is underground, of course, and we hiked along what appeared as a sandy, cracked-silt, dry valley, with awesome sand dunes up to 150m (500 ft) high on the south side and rolling desert to the north. Occasional rose-colored granite outcrops emerged from the sand dunes.

We made 3 night camps on sand bars.  We rationed our water carefully until we finally found surface water seeping from the rocks, which we drank un-treated.  Each day we walked out of camp in the pre-dawn darkness, until about noon, when we would find a bit of shade to lay in and lunch on dried fruit and crackers. By midday the heat was an unapologetic 44 C (111 F). During these necessary respites the documentation aspect of TRACKS occurred, with the local conservationists interviewed on camera about the nature conservation challenges, issues, and accomplishments in their work and region.  When the slanting rays of the sun cooled a bit, we continued hiking until dusk. 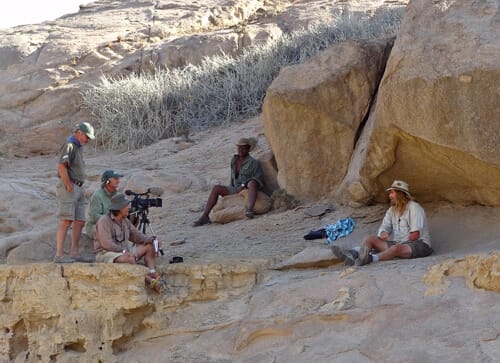 Memories and images from the trail: 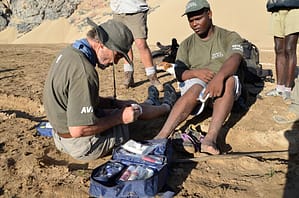 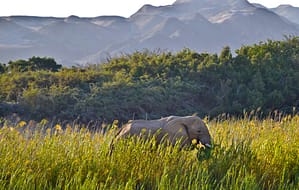 On day four we began to see a different spoor – cattle.  We were approaching Purros. By mid-morning the back up team met us.  For part of the last 8 kms we were joined by Tessa and Liam (Ian Michler’s partner and their 4 year old son), Sharon McCallum (Dr Ian’s wife and the core of the logistics effort), and Anton Kuuypar the fabulous “do-everything” gap-year student.  It was very hot.  We learned later at base camp that they recorded 46 C (115F) in the shade.

We walked thru the midday heat, stopping frequently in the shade of a camel thorn trees (acacia erioloba).  Tier, the Jack Russell, was beginning to suffer…imagine how hot it was as close to the heat-reflecting sand as he was!  Chris would pick him up frequently, douse him with a splash of water, and he would perch on top of Chris’ backpack for awhile. In great contrast was Robbin — a long-legged, easy–gaited, quiet, 34 year old local Himba who works with IRDNC – who strolled along like it was a walk in a park. I saw him drink once, briefly, during the entire morning and early afternoon. For the rest of us, it was impossible to stay hydrated.

By 1:30p we walked into base camp as we had left Rocky Point four days earlier…to the welcoming, soft sound of Frank Raimondo’s harmonica.  The cool water was a treat, as was the cool beer.

That evening we were joined by the remarkable duo of Garth Owen Smith and Margie Jacobsohn, pioneers of community-based natural resource management.  Garth joined the core team of Ian and Ian for the next, 3 day sector on mountain bikes, starting after a day of rest.

Before sun-up the next morning I left with Tessa, Liam, and Festus for the 14 hour drive to Windhoek, the first 6 hours of which was through the many communal “conservancies” (initiated by Garth and Margie with local communities) that constitute a major part of Namibia’s remarkable conservation success story. From the Land Rover we saw desert elephant, ostrich, giraffe, gemsbok, springbok, Hartman’s  zebra and more.