1 May 2012 wake-up call at 0500 – it was very dark and damp on the little promontory of Rocky Point, jutting into the Atlantic Ocean on Namibia’s Skeleton Coast.  After years of discussion, an announcement of intention during WILD9 (Mexico, 2009), and two years of planning, Tracks of Giants was finally on its way.

There was a palpable sense of anticipation and slight nervousness. Everyone was anxious to get going so packing was quick, and followed by even quicker breakfast of cereal and rusks with some hot tea.   Suddenly it was time, and the banner was unfurled in the mist and the bobbing lights of headlamps –  cameras whirred and flashed.  As the initial hiking team of 11 of us tromped off into the sand to the wonderful, soft sound of Frank Raimondo’s harmonica, there was a faint, rose-colored strip of light across the desert horizon to the east.  Tier, Chris Bakkes’ feisty and famous 7 year old Jack Russell,  gave a few excited barks and ran off ahead of us.  The back-up team stayed behind to pack and do the return journey to the base camp at Purros. The 5000 km journey across Southern Africa had begun. 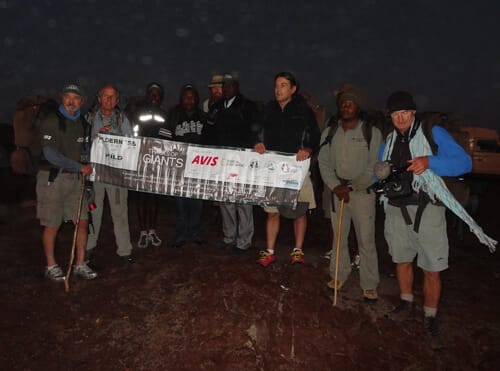 The hikers moved out, and our wilderness trail started with a 14km trek south to the mouth of the Horuseb River, the largest of Namibia’s west-flowing, seasonal rivers that drain into the Atlantic.  We set a fast pace across loose sand, working off the nervousness and settling into our packs. 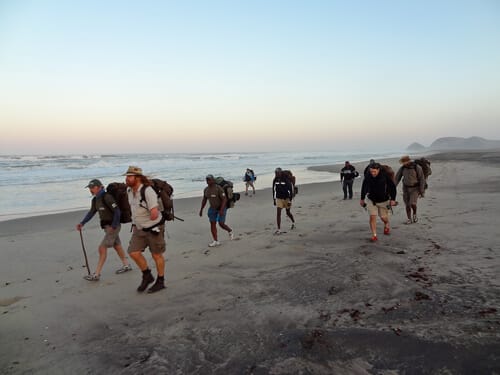 As the eastern sky lightened, the sun finally started to glint off the rollers and whitecaps to the west, and the mist cleared.  The Skeleton Coast of NW Namibia is a fabled and mysterious strip of ancient desert along the Atlantic Ocean. The cold, north flowing Benguella current comes directly from Antarctica and hits the arid western coast of South Africa and Namibia, often generating a thick marine layer of fog and mist that has been the cause of many shipwrecks along its shores…hence, its name.  The Benguella is also a nutrient rich current, supporting a significant commercial fishery and numerous, huge colonies of Cape Fur seals along the coast.

It’s one of the most unusual ecosystems in the world, and endlessly fascinating.  As we hiked south we saw ample, fresh tracks of the brown hyena, readily identified by the clawed, large front paw print with a smaller, hind paw print right next to it.  Often cris-crossing these spoor were lots of smaller tracks of the fox-like, Black-backed jackel. These predators and scavengers exist off the Cape Fur seals, snatching young from the fringes of the huge colonies, and feeding on the many carcasses that wash up on the beach.

Namibia is a remarkable country and unusual country with a commitment to nature conservation. 42% of its land is under some sort of formal protection, with good ecological connectivity, making it a superb, global example of Nature Needs Half.  It is also the only country in the world whose entire coastline is under formal conservation protection.  Yes, there are still many issues and challenges, but it is rightly a remarkable example of nature conservation and a true, global model.

We first identified the Horuseb mouth by the towering sand dunes along its southern bank, and we finally arrived there by mid-late morning.  The weather was clear and the sun warm, but the cool ocean breeze was perfect.  Packs off, we sat in a loose circle for our “indaba,” the traditional Zulu gathering where stories are told and issues clarified.  This is the way that every Wilderness Leadership Schooltrail begins, with each trailist taking as much time as they need to share who they are and why they are on the trail.   This is just one of the many ways that makes a WLS experience more than an adventure hike, with all the normal excitement and banter. It is also and most importantly an inner journey, in which discovery is both around and within each person. In wild nature is the perfect place to better understand your own personal nature.

>View the photos of the team: Hiking the Skeleton Coast