Tracks of Giants: The first days of the expedition 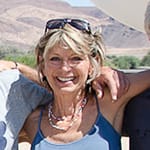 Home alone after an intense busy stressful intimate people-filled period of the first 12 days of the Tracks of Giants project –   it is difficult to settle.

Responsibility for the logistics of the expedition have, for the last year, weighed heavily on my sleep patterns and stress levels and on relationships.  However, contrary to my concerns, as of today, 17 May 2012 (17 days into the Tracks of Giants expedition) the cyclists and the back up team are running exactly as set out on my detailed schedule, and are where they are meant to be – arriving at Ongava, a Wilderness Safaris lodge just outside Etosha in Namibia for a day and half well deserved rest.

Reflecting back at my time with the group in the north west of Namibia, large numbers of strangers to cater for before the WLS trail caused anxious moments for our newly formed back up team (BUCS) – but they coped superbly and as they have got to know each other’s strengths (and non-strengths) so the expedition machinery is slowly becoming more well-oiled. 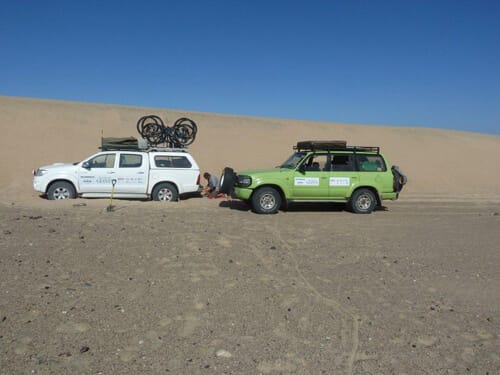 Part of the logistical challenges: getting stuck in the sand!

An emotional – but timely – send off of the 11 trailists on 1st May 2012  from Rocky Point on the desolate but desperately beautiful Skeleton Coast.  Whilst the walkers contended with unseasonally hot temperatures and lack of water, BUCS were anxiously treading water (??) at Puros Camp Site waiting for news.  All went well and the hike finished on time on the 4th May.

Stories of sore and stiff joints and blisters and painful body parts were downplayed in comparison to the sense of camaraderie and intimacy that each hiker experienced.  James Mukuyu, a sustainability student in the city ofWindhoek, was emotional in expressing his first real experience of being in nature although he is actually studying nature.

Award winning Namibian conservationists, Garth Owen Smith and Margie Jacobsohn, arrived late on the 4th May and early on 5th (a rest day for the expedition leaders) many of the hiking participants departed – the group was reduced to a more manageable 10. 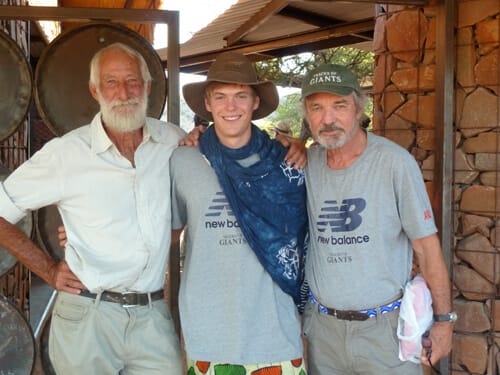 May 6th heralded the start of the cycling through Namibia – on a route recommended by GOS who had brought along his own cycle and sheepskin saddle cover  – heading north (and not east) on a rough, rocky, sandy, corrugated track of a road towards Orupembe (place in the middle of nowhere) amongst the breathtaking Etendeka mountain range.  We breakfasted, lunched and camped in dry river beds in the shade of glorious Camelthorn canopies for the next 6 nights until I left, with the exception of two luxurious nights spent at Etaambura Conservancy Lodge.

I returned to Cape Townwith Nick Chevallier, the film maker, after an emotional farewell to the team at Onganga Spring – so remote it is not on any map.  Johnny Frankiskos drove us the 83 km to Opuwo where Nico Louw, a volunteer pilot for the NGO Bateluers was waiting to fly us back to Windhoek– exactly as planned!

Nick and I chatted about our time together – and we agreed that it is impossible to choose a highlight – there were so many – the unimaginable expanse of a star-studded night sky split by so many shooting stars – the many different people who we met or who joined at different times – the remote routes and variety of road surfaces we travelled – the stories we heard – the discussions we took part in – the  unbroken brightness of the cloudless skies and the heat between 2.30 and 4.30 each day – growing intimacy and friendship of all involved – the two leaders (Ian x 2) and BUCS.

What a privilege to have been part of all of this. Wishing the Tracks of Giants team continued good health, safety and much fun!

>View photos from the field team!