Update on Olive Ridley Turtles and the Dhamra Port, Orissa India: Controversial Involvement of International Union of the Conservation of Nature (IUCN) 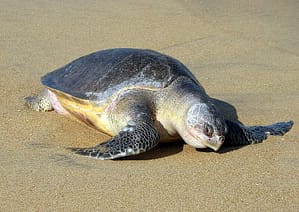 As many of you know, WILD has a long history of involvement with the special Olive Ridley sea turtles. These turtles are currently known to nest en-mass in only three locations world-wide, one of which is Gaharimatha National Park, just south of the Dhamra River where the Dhamra Port Company Limited (DPCL) has begun to build a mega-port. The environmental and social issues and implications of this port are numerous and serious.

A new twist is unraveling in the Dhamra port project – the involvement of the International Union of the Conservation of Nature — not in opposing the port, but engaging with DPCL in a controversial manner.

This week, we were alerted of a letter sent to IUCN (following the official grievance policy) voicing unresolved and unaddressed concerns from stakeholders and specialists in India to IUCN staff. The letter expresses serious concerns regarding the nature of IUCN’s involvement in Orissa and is backed by leading specialists and IUCN members from India. Their main concerns are: 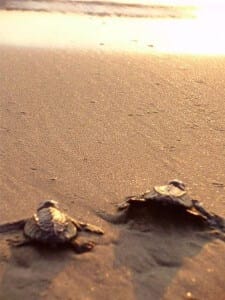 Actions by the IUCN go against their guidelines, best practices and the mission: The IUCN Mission Statement “is to influence, encourage and assist societies throughout the world to conserve the integrity and diversity of nature and to ensure that any use of natural resources is equitable and ecologically sustainable.”

The many concerns close with a bold statement: “It appears that the IUCN-DPCL agreement is driven by corporate concerns rather than environmental ones which has lowered the credibility of the IUCN in India and around the world.”

Signers on the document then list multiple actions suggested for the IUCN with regard to the Orissa port project and encourage a meaningful response to their concerns. Signers include leading specialists in India and members of IUCN, such as Belinda Wright (Wildlife Protection Society of India), Ashish Fernandes (Greenpeace), Jack Frazier (Smithsonian Institution), Biswajit Mohanty (Wildlife Society of Orissa), Bittu Sahgal (Sanctuary Asia) and many others. Download the full document >