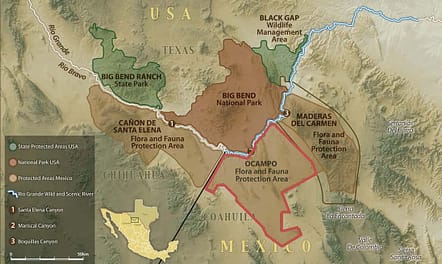 On May 19, in a significant step towards the first “peace park” between Mexico and the United States, protecting important transboundary wildlands, President of Mexico Felipe Calderon visited Washington DC and, with US President Barack Obama, made the following official announcement:

The Presidents noted the long history of bilateral cooperation in the conservation of natural and cultural resources. They recognized that Big Bend National Park and Rio Grande Wild and Scenic River in the United States and the Protected Areas of Maderas del Carmen, Cañon de Santa Elena, Ocampo, and Río Bravo del Norte in Mexico together comprise one of the largest and most significant ecological complexes in North America. In doing so, they recognized that increased cooperation in these protected areas would restrict development and enhance security in the region and within this fragile desert ecosystem. To preserve this region of extraordinary biological diversity, they expressed their support for the United States Department of Interior and the Secretariat of Environment and Natural Resources of the United Mexican States to work through appropriate national processes to recognize and designate Big Bend – Rio Bravo as a natural area of bi-national interest. The Presidents underscored their commitment to manage the region in a way that enhances security and protects these areas for wildlife preservation, ecosystem restoration, climate change adaptation, wildland fire management, and invasive species control. (excerpt from Joint Statement) 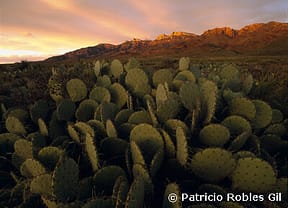 The protection of the Big Bend – Rio Bravo region has been an ongoing conversation since the mid 1930s, with a major step forward following the declaration of the US Big Bend National Park in 1944. President Franklin Roosevelt, a leader very much interested in wilderness and the protection of natural lands, wrote a letter to Mexican President Manuel Avila Camacho, proposing the idea of an adjoining International Park. At the time, no action was taken. However, interest in the “magical” region remained of particular interest for high-seated political figures.

Discussion regarding the conservation of the region, as an important target area for both expanded nature conservation and for bilateral cooperation, was revived and WILD’s involvement began with conversations about a transboundary park during the planning and convening of the 8th World Wilderness Congress (Alaska 2005).

WILD ramped up efforts while planning for WILD9, the 9th World Wilderness Congress (November 2009, Merida, Mexico) when the WILD9 Executive Committee proposed the idea to Minister of Environment Juan Elvira Quesada. Minister Elvira, with Ernesto Enkerlin and his team from CONANP (National Commission for Protected Areas of Mexico), fast tracked this project, continually pursued the necessary cooperation and commitment from both sides of the border, ultimately leading to the announcement today.  Numerous NGOs in the US, the Mexican Embassy in Washington DC and the National Parks Service (International) also played key roles in reaching this important milestone.  Also of interest, there was a formal resolution (Resolution 33a) passed by the WILD9 delegates on transboundary parks, listing this region as a priority.

The Presidents discussed a wide range of issues, and reaffirmed their commitments to strategic partnerships on many levels. The full statement is available online.