What does TV teach us about wildlife?

An interesting article in the Huffington Post yesterday brought up an interesting conversation – one which I have personally contemplated for a while.  Many times, TV shows, documentaries or movies about nature provide an educational experience for viewers.  Take for example the awesome Planet Earth series, one of my favorites.  But, sometimes media outlets can go to drastic extremes to entice viewers or create drama.  Sensationalized violence (or should I say, natural selection) can mislead viewers and does very little to promote the conservation of wild animals and wild places. 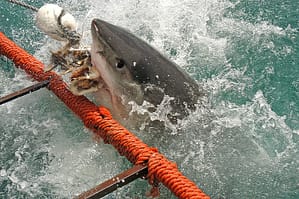 Chris Palmer talks specifically about Shark Week on the Discovery Channel.  He also mentions shows like “Untamed and Uncut,” “Man vs Wild,” and “When Animals Attack.”   While these shows do bring some amount of nature through the TV screen of viewers across America, I tend to agree with Palmer.  These shows appeal to TV viewers’ need for exciting, fast-paced entertainment filled with sex and violence — but they may be doing more harm than good in connecting people with nature and furthering conservation efforts.

In following with our support and close partnership with the International League of Conservation Photographers, the following excerpt from Palmer’s piece seems to nudge at the need for something similar for filmmakers…

“One of the least expensive ways to create content is to send someone…to grab at animals and make them seem menacing and dangerous. These programs not only misrepresent the animals, but also involve the harassment and abuse of animals and suggest that such behavior is acceptable. Responsible filmmakers invest the time and money it takes to film animals over long periods of time without disturbing them. They take pains to keep their distance, to avoid disrupting the environment, and to present a balanced, accurate view of the animals.”