A priceless World Heritage Site in South Africa is highly endangered by an open-cast, coal, strip-mine operating recklessly right on its boundary – and that is now set to expand! Mapungubwe National Park – a World Heritage Site and critically important transfrontier conservation area straddling South Africa, Zimbabwe, and Botswana — honors and protects the wild, natural area that is the site of “one of the most complex kingdoms that ever existed in Africa”, some 1000 years ago. 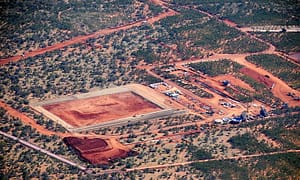 The Australian mining company CoAL has submitted plans to expand the already damaging operations. Our South African sister organization in our Wilderness Network, the Wilderness Foundation, and Peace Parks Foundation (which WILD represents in the United States) have joined forces with three other conservation organizations in South Africa (Birdlife, WWF, and Endangered Wildlife Trust). Backed by the Centre for Applied Legal Studies at University of the Witwatersrand, they have filed a legal challenge, citing: improper and deficient Environmental Management Plan; unlawful conduct of operations; poor evaluation capacity; and more.

The WILD Foundation supports this action, asking you to actively solicit the South African government and CoAL to cease and desist, in order to save this priceless wilderness and cultural legacy.

“On 8 April 1933, a remarkable discovery was made in the Transvaal, South Africa — a grave of unknown origin, filled with gold-work, was found on the summit of a natural rock stronghold in a wild region. This site was Mapungubwe Hill, which serves as the capital of the ancient Mapangubwe Kingdom, situated on the international borders between South Africa, Zimbabwe and Botswana. Since the site was discovered, the same story of Mapungubwe has been told. It’s a story of a flourishing Iron Age metropolis on the Limpopo ruled by an African king almost a thousand years ago.

The Kingdom comprised a sophisticated state system, with highly developed agriculture, mining, and metallurgy industries and traded with countries as far afield as China. According to the Archaeology Department at the University of the Witwatersrand, Mapungubwe represented ‘the most complex society in Southern Africa’.

In July 2003, the Mapungubwe Cultural Landscape became South Africa’s fifth World Heritage site and was officially announced as Mapungubwe National Park in May 2004”