The future of a rare herd of desert elephants in Mali is under threat from one of the worst droughts in living memory, which has left a key water source at its lowest level in a quarter of a century and is breaking down the usual peaceful co-existence between the elephants and local herdsmen. 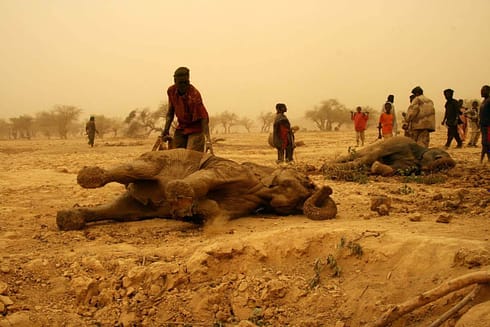 The 350 to 450 elephants of Gourma, the northernmost herds still alive in Africa, are being forced to trek ever-longer distances across the fringes of the Sahara to find scarce water, conservation organization Save The Elephants warns today.

Juveniles are likely to be among the worst affected, as – unlike the bigger bulls – their trunks are not long enough to reach deep into remaining wells. Six elephants have already been found dead. Four others, including three calves, were recently saved from a mud hole….only to die soon thereafter.

Save the Elephants’ scientist Jake Wall is in Mali following the situation closely. He says:

“Banzena has almost completely dried leaving no more than 30 cm of muddy, sediment filled water. The elephants are now in a deadly situation as they wait anxiously for the rains to begin. Six elephants have died in the last couple of months from causes related to the drought conditions.”

A group of NGO’s comprising Save the Elephants (STE) and The WILD Foundation (WILD) have been monitoring the last rare desert elephants in Mali in collaboration with the Malian Environment Ministry directorate for conservation – Direction Nationale de la Conservation de la Nature (DNCN). This unique herd of elephants is now in a desperate situation due to a drastic shortage of water, and we are launching an emergency appeal to save them. 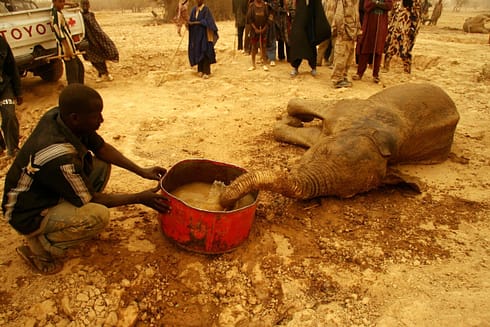 The desert elephants of Mali live in the Gourma district to the South East of Timbuktu. They are the northernmost elephants surviving in Africa, estimated at between 350 and 450 in number. They have adapted to survive in the harsh conditions of the Sahel by migrating long distances in search of water and food but live on the margin of what is ecologically viable.

Dr Iain Douglas-Hamilton of Save the Elephants has been monitoring their range since the mid 1970s. He says:

“In the Gourma region of Mali are the last elephants living in the Sahel and they are northernmost in Africa. Their range has shrunk drastically since the 1970’s due to climate change and overstocking of livestock which has degraded the habitat. These elephants have the longest migration route of any in Africa and move in a counterclockwise circle of about 700 km. At the height of the dry season there are only a handful of shallow lakes left to them until recharged by rains in July and August.”

This year the water levels are extremely low in the Gourma region due to uneven rainfall in 2008. The most important of these lakes, Banzena, is the lowest it has been since 1983 when it dried completely. 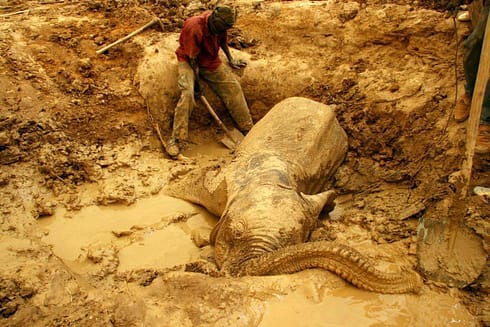 Over the last few years a team of Save the Elephants in collaboration with the DNCN have been closely following the movements of the elephants using 9 collars fitted with Global Positioning System (GPS) receivers. The collars transmit the hourly positions of the elephants three times daily via satellite link and give real-time information about the activities of the elephant herds. The WILD Foundation is using this information and that collected in previous years they’ve worked in Mali, to create outreach and coordination programs with local officials and villagers to try and reduce human elephant conflict, and reduce stress on the elephants.

On the 16th of May, Jake Wall, a scientist with Save the Elephants, returned from the most important water source, Lake Banzena, on which the elephants rely at the height of the dry season. He found it almost dry.

“The situation is equally dire for the Touareg and Pheul herdsmen who rely on Banzena for their cattle and many cows are now dying each day from lack of water and the soaring temperatures which reach 50 degrees Celcius in the shade. The stench of rotting corpses fills the air and what little water remains is putrid and undrinkable by all standards. The normal peaceful coexistence between the elephants and herdsmen is starting to break-down and giving way to conflict over access to water.”

Very few options now exist for finding water and we are witnessing erratic movements further and further afield as they desperately search for water and forage.

“Small thundershowers last week left tantalizing puddles 20 km to the south of Banzena, enough to survive on for a couple days at most, but the herds are now being forced back north to the almost dry lake.”

At a dry lake bed 50 km to the east of Banzena, 6 bull elephants are surviving by getting on their knees and reaching for water with their trunks that is 3 meters beneath ground level and through a hole dug by the Touareg. Younger elephants who are not as big or as skilled cannot possibly reach these hard to get at water points. The long distances, high temperatures and weakened condition will also take a heavy toll on the younger elephants.
Jake Wall says, “I’ve witnessed first hand how tough the situation can be for young elephants. Last year during a radio-collaring operation, I came across 3 elephant calves trapped in a mud hole along with a half grown female. From the age structure it looked like they had lost their matriarch. Evidently, this young female had led the youngsters into a waterless area. They happened upon a shallow well dug by herdsmen for watering cattle and it appears that the elephants, desperate for water, tumbled into the well and all four were hopelessly stuck in the mud for three days. Our Save the Elephants team pulled them out one by one, but they were so weak that only the large female survived. She was radio-tagged and we watched her dash 80 km to the nearest water at Lake Banzena.”

Urgent action is now needed to secure water for the elephants until the rains commence as predicted in early June. Fortunately, two pumps already exist at Banzena for pumping water and the DNCN have fixed them and have staff on site with the pumps running. Save the Elephants, in partnership with the WILD Foundation and the Mali government (DNCN), is appealing for funds for diesel necessary for their operation. It is not certain whether the water quantity will be sufficient

Vance Martin, President of The WILD Foundation, said that they are working on a long term plan:”After years of work in Mali we understand what is needed now. We’ve been working for some months developing a long term plan to reduce human elephant conflict, secure permanent water for the elephants, and create separate arrangements for the local villagers and their cattle. There is a way to do this, working with local people, so the needs of both people and wildlife are part of the solution….but it must be done properly or we will end up in the same position in a few years.”

If you want to help us save these elephants please send a donation via our online donation system.