A Symbol of Wilderness: the Erythrina Leaf

“You are tired with years of civilisation.  I come and offer you what? …a single green leaf,” Grey Owl 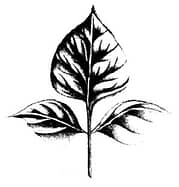 When I was tramping the iMfolozi game reserve in Zululand in the early 1950s and thinking about starting the Wilderness Leadership School, I knew it was essential to select the right symbol. Most conservation organizations in Africa had used horned heads of antelope or rhino or carnivora. These had become cliche symbols with no real meaning. I wanted the Wilderness Leadership School symbol to be significant, simple, different and non-aggressive.

One evening, sitting at the camp fire, the sounds of the African night echoing all around me, I remembered as though in a dream a story of Grey Owl and how he saved the beaver of Canada. In my youth I had read his book and in later life became intensely interested in his philosophy of wilderness.

Grey Owl’s real name was Archie Belaney and he came from Hastings in England. He joined the Ojibway Indian people and became accepted as a member of the tribe. He took Indian wives and hunted and trapped in the wild country of Ontario. His wife Anahero persuaded him to stop trapping. Grey Owl became a writer and lecturer and his fame spread across the world. He tried to lay a false trail about his origins and created a mystique about non-existent Indian forefathers. When he died he was accused of being a fraud but people had simply misunderstood what he was trying to do.

Toward the end of his life he was in the United Kingdom. He was a very sick man. Years of frontier living and wounds from the 1914-1918 war had weakened his body. He was on his last lecture tour and no doubt had premonitions of his death. But he spoke with nostalgia about the great rivers, the vast forests and the high mountains of Canada, the wildlife, the Indian people and the spirit of the wilderness. The he said to his audience: “You are tired with years of civilisation. I come and offer you what? …a single green leaf.”

In my musings I remembered the leaf and knew that this had to be the symbol of the Wilderness Leadership School.

I told my old friend Magqubu Ntombela, the Zulu who had been my game scout and mentor, that I wanted a leaf that would represent what I had in mind, an organisation that would give people an experience in wild country.

At that particular time I was looking for a wilderness area in Mfolozi game reserve, and together we had walked many miles along the banks of the two Mfolozi rivers. The old Zulu said he would think about a leaf and as we walked he pointed out different trees. Then one morning we left camp early and he took me down the Black Mfolozi river towards the junction of the two rivers. This was the hunting ground of all the great Zulu kings–Tshaka, Mpande, Dingane and Dinizulu. Magqubu called out the praise names and spoke to the spirits of his forefathers who had been here with the kings and with Tashaka when he had single-handedly killed an elephant with a hunting axe.

Then he stopped at a tree the Zulus call msinsi; in Latin Erythrina caffra. Magqubu plucked a leaf and said, like a Biblical injunction, “Thatha Lokhu–take this. Take this leaf because it comes from a tree that is a tree of the wild and you will also find it next to every kraal. So it is a tree of the people too.”

The three points of the leaf symbolize the most important relationships in the world: person to divinity; person to soil; person to person. Many years later I realised that the fourth relationship was the internal relationship of each of us to ourselves, and that was as big a mystery as the leaf itself.

In 1977 at the first World Wilderness Congress, the Erythrina leaf was chosen as the Congress logo. Arrows pointing towards it were added. This represented a call to people from all over the world to come and talk about Grey Owl’s cri de coeur: “You are tired with years of civilization. I come and offer you what? …a single green leaf.”