The 1st World Wilderness Congress was held in October 1977, in Johannesburg, South Africa, with 2,500 delegates from 27 countries. Proceedings: Voices of the Wilderness, edited by Ian Player and published by Jonathan Ball, 1978. 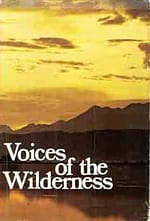 Voices of the Wilderness is an edited compilation of papers presented at the 1st World Wilderness Congress. Among the eminent contributors to the book are Laurens van der Post, (who has also written the foreword) Robert Ardrey, Iain Douglas-Hamilton, Ian Player, Edmund de Rothschild and a host of other renowned conservationists.