Sustainability gets real in Boulder on July 25th

On July 25th, seven of the world’s leading climate visionaries and experts will converge at the Macky Auditorium to debate the crucial next steps humanity must take to adapt to drastic changes in the global environment. This event is open to the public, is hosted by the WILD Foundation and the International Society for System Sciences (ISSS), and will shed light on expert disagreements within the sustainability movement and uncover new avenues for progress. 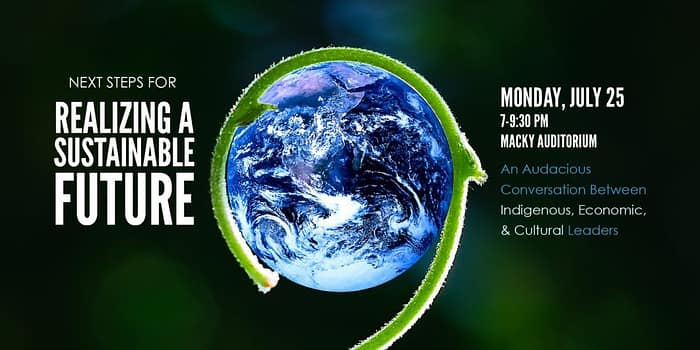 Panel participants include the Obama administration’s senior climate advisor (Bill Becker), a former managing director of JP Morgan (John Fullerton), a tribal leader from the Bering Sea (Ilarion Merculieff), the director of the award-winning documentary, Chasing Ice (Jeff Orlowski), a business entrepreneur and author of The Blue Economy (Gunter Pauli), incoming director of the Colorado’s Future Earth hub (Josh Tewksbury), and a leading professor of evolutionary biology and animal rights author (Marc Bekoff). Each panelist has earned international recognition in different sectors for his contribution to the environmental movement and policy. Having established the prominence of their visions in their own fields, they are taking steps to bridge the gulf between their respective fields and advance the merits of their approaches among a broader spectrum of ideas. Learn more about the speakers here >

“Creativity and abundance flourish synergistically at the ‘edges’ of systems,” John Fullterton wrote in 2015 in Regenerative Capitalism. “At those edges the opportunities for innovation and cross-fertilization are the greatest.”

Fullerton’s observation echoes a growing recognition among climate scientists and activists concerning the interconnected nature of environmental challenges. Increasingly, these groups are drawing attention to the urgent necessity of solutions that emerge from across disciplines. The July 25th panel discussion of those with seemingly-disparate agendas is designed as a microcosm of the common ground that must be achieved nationally and beyond if the future of the planet can be secured. The collaboration of economic, cultural, and scientific approaches, based in mutual respect and honesty, is an exciting method for exposing and overcoming competing assumptions that are stubborn barriers to solving what many see as the most urgent and complex problem facing our world and all living in it.

“Often, the greater our ignorance about something, the greater our resistance to change,” argued Marc Bekoff in Animals Matter. By bringing important differences to light in personal dialogue between leaders, this conversation will expand awareness and enhance opportunities for working together in the future.

The event begins at 7 p.m. and will include time for audience questions. Amy Lewis, a former instructor of environmental policy at Colorado State University and the current Director of Partnership Development at the WILD Foundation, will moderate the discussion. Tickets are $20 and seating is limited.