One of the greatest migrations in all of North America was taking place as I raced eastward away from the setting sun. I was leaving behind bustling, nature-minded Boulder, Colorado nestled in the foothills of the Rockies, and headed towards the little Nebraskan farm town of Kearney and the great Platte River. My objective: to witness the tens of thousands of Sandhill Cranes that are expected to fly through that little town every spring and fill the skies with life and noise.

Many of us strive to see the beautiful and humbling shows that Mother Earth has dazzled people with for centuries. The great awe of the Wildebeest migrations in Kenya, the intense power of glaciers calving into the Alaskan seas or standing in a dense Mexican forest as the trees start to bend under the weight of millions of delicate Monarch butterflies. It is scenes like these that bring us to our knees and remind us that we are but one species of creature trying to survive on this Earth. Though these things are nothing but glorious, one must pause to observe the natural phenomena happening in our own little pieces of the globe. Ones that you may not always see on the cover of your favorite coffee table book, but may just be right around the corner, like in “The Crane Capital of the World,” Kearney, Nebraska. 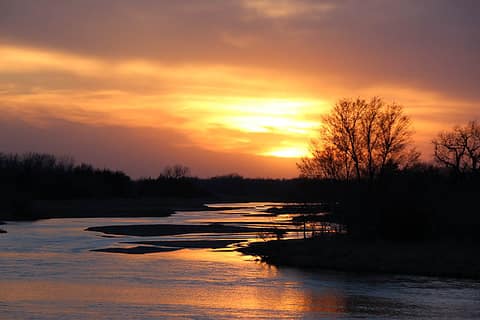 These cranes, some of the oldest living birds on earth, funnel through a narrow path in the middle of Nebraska every year on their spring migration from the southern U.S. and Mexico to their nesting grounds in the northern reaches of Alaska and Siberia.  It is on the Platte River and its surrounding land that the cranes stop for a very important feeding and rest period.  The sandbar-spotted Platte provides the cranes with predator protection, while the surrounding cropland and healthy dose of Platte snails provides them with the food and strength they need to get through the rest of their journey. 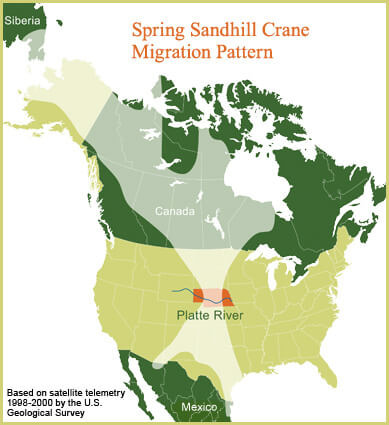 The sun was sinking low as I hiked towards the wide and shallow Platte River.  A friendly volunteer that spoke of nothing but “Crane Etiquette,” as they call it in Kearney, guided me to this spot.  It was made very apparent to me that the utmost effort was put into showing respect to the environment and the cranes. Part of the conservation efforts in this area was to uphold the peaceful coexistence of humans and creatures. 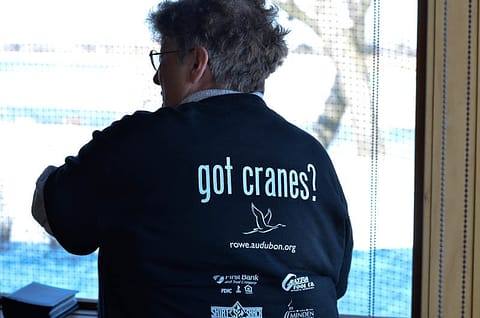 As I sat there waiting for the cranes to come, I recalled when I was a young girl going to Alaska with my family.  We went to this beautiful glacier that you could hike right up to the face of.  Ten years later I returned to that glacier so that I could walk up to that same spot and see that same beautiful glacier.  I got to that same spot where I had been as a little girl, only to have to peer up into the distance to where the glacier face had now receded.   It is remarkable to see how much the landscape has changed in just my short lifetime.

Kearney, Nebraska is another place that I came to as a little girl but instead of a glacier it was Sandhill Cranes we were admiring.  You can only image my ten-year-old eyes grow large as the sky suddenly turned black with cranes that shrouded out the sunlight.  Now, 15 years later, I wondered if those cranes were actually going to come, or if it would be like the glacier…where so much had changed in such a short amount of time.  Would I be sitting here waiting for these cranes that were not even going to show?

Have we damaged our planet this much already in just my short lifetime?  I got nervous as the skies turned darker.  Only a few cranes started to trickle in, and my heart began to sink faster then the sun.  Then it happened…a noise that I will never forget, and a sunset that will be burned into my mind forever.  Before me was the noise of tens of thousands of cranes trilling above me, the sunset that was blurred with countless flocks of these prehistoric creatures, and a bridge full of silent people in utter awe and peace with the natural world.  I had never been more relieved to see these birds in my life!

It was a sight that I knew was possible because of extremely successful conservation efforts.  The next day, as I walked the trail of the Audubon Rowe Sanctuary, a key player in the land conservation for the Sandhills, I happened upon a cheery volunteer.  She stopped and explained to me the collaboration amongst the local conservation organizations that make this possible.  Every year the Platte would flow thick with snowmelt from the Rockies.  This would clear out all of the vegetation that had built up on the sandbars in the river, which made the Platte such a great place for the cranes to stop.  In recent years, there has been considerably less flow in the river, and certainly not enough to clear the vegetation from the sandbars.  In turn, the cranes would be forced to stop elsewhere and not have the great protection from predators that the Platte once provided.  Now every year crews come in to do the job that the river once did.  They clear the sandbars of their woody vegetation, thus allowing the cranes that have been flying the skies of Kearney for centuries, the ability to continue their journey.

It is success stories like this that make my heart light.  What a beautiful thing to be able to continue to experience some of the earth’s greatest spectacles because of the conservation efforts put forth! Not only have the physical conservation efforts proven successful, but so has the community’s commitment to ensure that the people and cranes coexist peacefully. When we at WILD talk of our Nature Needs Half initiative, this is just one of the stories that come to mind.  The management of such areas as Rowe Sanctuary, where the flow of people is based on the schedule of the cranes, and all observation areas are built in ways to not disturb them, is a prime example of how well people and nature can coexist.

There are natural wonders and successful conservation efforts in every corner of the earth, not just the African Serengeti and the rainforests of Mexico.  Please share with us your stories of the beautiful migrations and natural events that have happened right in your back yard.