Tracks of Giants: Crossing the Desert

I have been to the tiny dusty village of Puros a number of times, but never had this collection of drab tin and pre-fab dwellings been such a welcome sight. Lying on the edge of the Hoarusib River that splits the true Namib Desert from the pre-Namib and Escarpment to the east, it is where our trusty back-up team had been camped out for a week or so. And after 4 gruelling days and 85 kilometres hiking through the Namib, as we exited the river canyon, all minds shifted to the rituals and comforts associated with a familiar and well laid out campsite – fresh water, shade, shower, wholesome food and of course, the friends and family awaiting our arrival.

It was at once a truly inspiring and humbling way to start the TRACKS expedition – some of the most spectacular desert wilderness found anywhere on the continent, tempered by the testing environmental conditions. Awe and respectful awareness soon became our travel companions.

After a somewhat emotional send-off from the back-up team and family on 1st May, we headed south from Rocky Point along the endless beaches that dominate the far northern reaches of the Skeleton Coast National Park. Hours later, the route took us into the mouth of the Hoarusib and away from our last comfort – the cool sea-breeze that sweeps in off the cold Atlantic waters.

Despite the searing 42ºC plus daytime temperatures, the next few days passed in a blur of tremendous rock and dune scenery, thirst, and the ever-present banter of a growing camaraderie. At first sight, these landscapes appear barren and seemingly devoid of life, but time soon unveils the faunal and floral delights, and the intricate balance that defines every plant and creature’s existence. 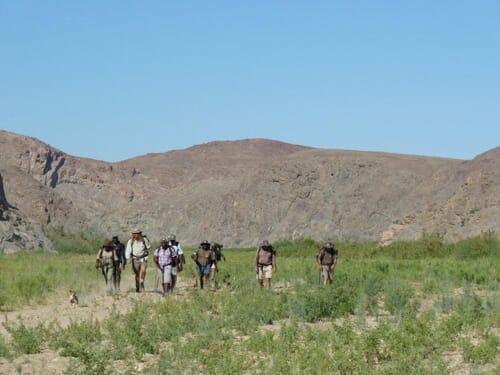 Highlights on this leg included a close-up elephant sighting, plenty oryx and springbok at the water seeps and the occasional jackal and ostrich. The last evening provided a real thrill when the sounds of a grunting leopard echoed along the canyon walls. And then as we set out in the first light of the last morning, the squeals of two brown hyenas broke the dawn.

Because of the harsh and vast terrain, as well as the intense heat, the first two legs of the TRACKS expedition were always going to be tricky ones. Fortunately, for the Namib crossing we had the vast experience of Chris Bakkes and Festus Mbinga, both from Wilderness Safaris, and Mandla Buthelezi from the Wilderness Leadership School to lead the group.   For this leg, we were also joined by Vance Martin from The WILD Foundation in the USA, John Kasaona and Boas Hambo from the Integrated Rural Development and Nature Conservation (IRDNC), Jerome Mukuyu, a university student from Windhoek, and Robin from the Puros Conservancy. Nick Chevallier, the filmmaker and cameraman, walked (and documented) the entire trail.

For the next leg, approximately 110 km on mountain bikes, we were joined by Garth Owen-Smith and Margie Jacobsohn, founders of IRDNC, a hugely influential community-based conservation organization instrumental in the success of northern Namibia’s conservancy policy. Garth cycled with us while Margie assisted the back-up crew.

These last two days in the saddle have been as testing as the Namib walk – no let up yet in the daytime temperatures, and then the extremely demanding task of steering a bicycle through long patches of soft sand and loose gravel, or over nasty corrugations. Despite the incredible mountain scenery and the numerous wildlife sightings, which included elephant, cheetah with cubs, aardwolf, and bat-eared fox, there were times on that first afternoon as we slowly ground our way out of the Khumib River bed and then up and over the rocky Oharondua Nomanga Pass that I questioned the sanity of it all.

But now, as I write this first blog, we are enjoying a comfortable rest day in Etaambura Lodge, the region’s premier self-catering community establishment. Extremely well crafted from local materials, it sits perched up on one of the numerous basaltic outcrops that comprise the Etendeka Range, and with splendid 360º views of the surrounding countryside – all is at ease and there is nothing insane about what TRACKS is about.

Which brings me on to the issues – already we have encountered a number of them and the documentation process is well under way. Land-use competition, tender and stakeholder disputes, the human-animal conflicts, and the vital importance of corridors for both wildlife and the rural nomadic Himba people have all presented themselves. Our most demanding challenge is going to be recording these disputes, challenges and successes as accurately and authentically as possible.

In ending this first blog, an introduction to the Buck-up Crew (BUC’s) is long overdue. Johnny Frankiskos and Frank Raimondo are behind the wheels of the two vehicles, and they are being ably supported by Anton Kruyshaar, who also doubles us our bicycle technician, and Mandla Buthelezi. They have done an incredible job and without them, TRACKS is simply a non-starter. Our sincere thanks and appreciation go to them.

As I mentioned earlier, we’ve been extremely fortunate to have Nick Chevallier, a well-known and highly regarded professional film-maker with us for both these legs. His professionalism has been an example to all.