Kayapo lands conserve the last remaining large, intact block of native forest in the southeastern Amazon, and maintain the connectivity of this ecoregion with the western Amazon. They confer incalculable benefits to protection of biodiversity, mitigation of climate change and preservation of the crucial role of Amazonian forests in producing rainfall over a much larger geographic scale.

Kayapo territories are large enough to protect large scale ecological processes. For example, very large areas are required to maintain tropical tree species because individuals of species are usually very sparsely distributed. Most tropical tree species depend on co-evolved animal vectors for pollination and seed dispersal across large inter-individual distances — small areas do not contain enough individuals or viable animal vector populations for regeneration of many forest tree species over the long term. The intricate web of interdependence among Amazonian species requires large areas for these ecosystems to function and persist. 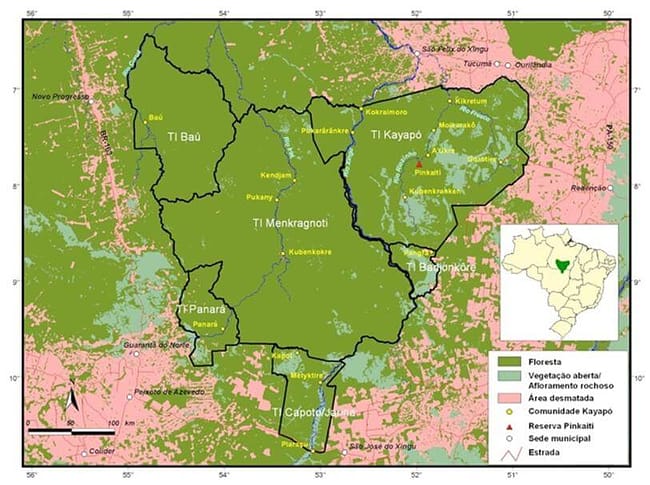 Kayapo lands remain reasonably undisturbed. Large-bodied game species (including large cracids, lowland tapir, and white-lipped peccary), which are preferred by local peoples throughout the Amazon are abundant within the hunting range of Kayapo communities. Protected lands in the region safeguard a full complement of disturbance-sensitive wildlife and an entire vegetation transition from open savanna (cerrado) to close-canopy forests, along with endangered and threatened species (Table 1).

Kayapo lands and the contiguous Xingu Indigenous Park to the south protect more than four hundred kilometers of the Xingu river from degradation by deforestation, pollution and over-fishing. Preliminary surveys indicate that as many as 1,500 fish species inhabit the Xingu River. Fish are the most important source of protein for local people of the Xingu. Sixteen species of fish are considered endemic to (i.e. only found in) the Xingu.