The 3rd World Wilderness Congress convened in October, 1983 (Inverness and Findhorn, Scotland) with 600 delegates from 25 countries. Proceedings: Wilderness: The Way Ahead, edited by Martin and Inglis, published by Findhorn & Lorian Press, 1984.

Mrs. Thatcher’s government (through the secretary of state for Scotland, George Younger) formally announced for the first time their ratification of the World Heritage Convention. Congress delegates recommended that the Cairngorm Plateau in Scotland be included on the Register.

Contemporary and historical nature art from around the world complemented the working sessions, in which concerned activists from (pictured) India, the Navajo Nation and elsewhere met with resource developers and policymakers.Barry Cohen (minister of environment, Australia) reported on developments in Australia since the 2nd WWC, with special reference to his government not allowing the Tasmanian dams to proceed, thereby protecting the Southwest Tasmanian Wilderness. 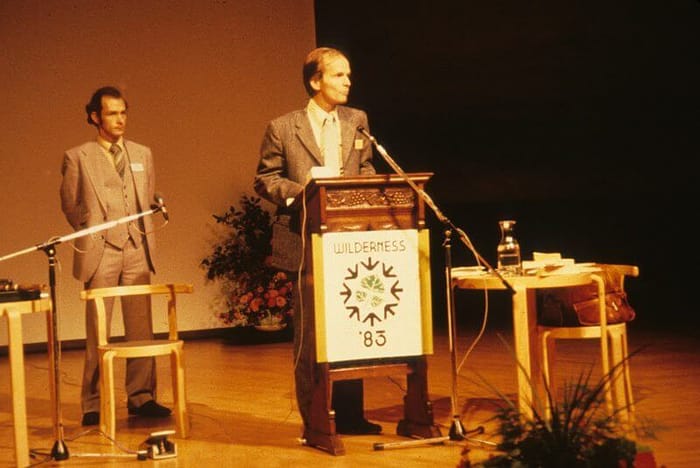 Continued to emphasize the need for a cultural and ethical dimension to conservation planning and policy making. (This concept has finally been acknowledged in the scientific arena by formation of a new commission within the World Conservation Union.)

Professor C.A. Meier (Switzerland), colleague and friend of the late Carl Gustav Jung, made the first address to an international conservation conference by a leading psychologist.

Prompted establishment of the Wilderness Action Group in South Africa to advocate for wilderness legislation.

The published proceedings were formally recognized by the British Council as one of the exemplary books published in the United Kingdom in 1984.

Why is wilderness such an important issue today? What responsibilities do we have to our environment? How can we balance the needs of individuals, society and the Earth itself in order to assure that wild places will remain a functioning and valuable part of our planet? WILDERNESS ’83, the 3rd World Wilderness Congress, convened in Scotland in 1983 to discuss these and many more questions. This book presents the edited proceedings of this Congress in an informative and readable style. The wilderness issue is explored in depth by a multi-disciplined gathering of scientists, artists, politicians, industrialists, tribal people, psychologists and philosophers. Contributors include Sir Laurens van der Post, Ian Player, Jose Lutzenberger, Felipe Benavides, Prof. C.A. Meier, Carolyn Tawangyawma, Dr. Morton Boyd , Dr. John Hendee and the Hon. Barry Cohen.