Proposed the establishment of a world conservation bank, or fund, the first call for new conservation finance mechanisms, which eventually led to the $1.1 billion Global Environment Facility.

In addition to working sessions which determined the 4th WWC action agenda, the cultural programme was rich and varied, including classical Indian dance, the International Youth Choir, art shows, cowboy poets, concerts…all inspired by wilderness. U.S. secretary of the treasury, James Baker, was the first finance minister to open a major conservation conference, calling for integration of economics and environment.

The first world wilderness inventory, prepared for the WWC by the Sierra Club.

Continued to advocate inclusion of wilderness as a separate and specific classification under the World Conservation Union (IUCN) Categories of Protected Areas, which was accepted by the IUCN in 1994.

The 4th WWC involved 1600 delegates from 62 nations, among them Ms Gro Harlem Brundtland (Prime Minister of Norway) and Maurice Strong, numerous Ministers of State, African Game Guards such as Magqubu Ntombela, and others. Resubmitted to the British government the resolution to consider the Cairngorm Plateau for listing as a World Heritage Site (to preserve its valuable wilderness characteristics), a process which was then begun by the British government in 1990.

First proposal for a world conservation corps, or Service, as an avenue for effective public environmental action. 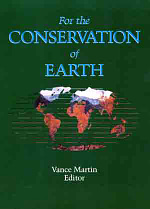 For the Conservation of Earth is the proceedings of the 4th World Wilderness Congress, Held in Denver and Estes Park Colorado. People from 65 nations, working together, sought solutions to the critical questions of environment and human survival, while protecting wildlands and wildlife around the world. A key compendium of information, prerogatives and historical data.

Proceedings from the 4th World Wilderness Congress in Colorado, USA 1987