The 2nd WWC, held in June 1980 in Queensland Australia, was opened by the Prime Minister of Australia, Malcolm Fraser, and delegates from 25 countries acted upon many issues of international wilderness and nature conservation.  Proceedings: Wilderness, edited by Vance Martin and published by Findhorn Press, 1981.

Areas of virgin rainforest in Queensland were protected under park status by the premier of Queensland.

The 2nd WWC cultural program focused on contemporary Australian nature art, as well as on the dance, song and artwork of the Aboriginal culture.

Bob Brown (president of Tasmanian Wilderness Society) brought, for the first time, international attention to the issue of wilderness conservation in Tasmania. This issue, concerning dams and hydroelectricity, later was a critical factor in the election of the new Labor government under Prime Minister Bob Hawke.

The 2nd WWC cultural programme focused on contemporary Austrailian nature art, as well as on the dance, song and artwork of the Aboriginal culture.The need to employ Aboriginal people in the Park Service, and to utilize aboriginal knowledge in nature conservation programs was recognized.

The first scholarly global overview of wilderness definitions was produced, which surveyed by relevant country the legal and cultural status of the concept. 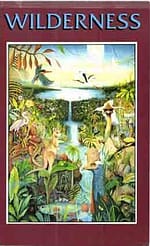 Why do we need wilderness on our planet? And if we do need it, how do we keep it wild? These were the questions discussed at the 1980 World Wilderness Conference in Australia, and Vance Martin has edited the most important contributions to this conference into a continuous text which examines the interplay of the scientific, ecological, social, cultural, and spiritual aspects of our world’s wild places. Contributions include many well-known scientists and environmentalists, including Laurens van der Post, Jean Dorst, Ian Player, Madame Laurence de Bonneval, Geoff Mosley and Ray Arnett. Eight pages of color and over seventy black and white photographs complement the text.