From 4-10 October, 2013 over 1000 delegates from more than 65 nations — conservationists, scientists, government officials, Indigenous leaders, artists and others – -and many others from the general public in Spain, filled the medieval city center of Salamanca to explore, debate, connect and forge partnerships and implement targeted actions to value and protect wild nature around the world, and to protect its benefits for human society. They were joined by approximately 25,000 people from 85 countries who followed the proceedings on-line. Many new initiatives developed as part of the WILD10 collaborative planning process were officially launched from the Global Gathering (plenary) platform and as WILD10 progressed through the Global Forum (working sessions).

“WILD10 occurred at a very appropriate time in European and global history. We know the problems; the focus now needs to be on solutions,” said Vance G. Martin WILD10 co-chair and President of The WILD Foundation. “Not only has WILD10 produced good conservation outcomes, practical and realistic, we’ve generated a sense of hope, inspiration and cooperation – the very elements that our world needs to have a new relationship with nature and between nations.”

1. The Statement from Salamanca – endorsed by 10 of the leading global conservation organizations and now being communicated directly to international development institutions and environmental organizations – emphasizes that wild nature is essential to human health and prosperity by providing critical “services” such as fresh water, clean air, biodiversity, and supporting sustainable livelihoods culture, identity and spiritual wellbeing. It calls for “changing the development paradigm that regards nature as a storehouse to be looted for short-term gain, to one that integrates a new imperative to protect the life-supporting services – and the beauty, mystery and magic – of wild nature.”

2. “A Vision for a Wilder Europe”, the result of 18 months of thorough research and debate among a group of 15 leading European experts, has been endorsed by leading conservation organizations. Backed by a 17 page technical paper, the three-page summary contains an action agenda for how a wilder (and healthier, more prosperous) Europe could be a reality by 2023.

Connected to this “Vision for a Wilder Europe” and a major focus of the first day of WILD10 was the comeback of selected species of wildlife across Europe due to developing and implementing better conservation policies and programs; de-population of rural areas by people moving from the country to the city; and better regulated hunting. The findings of a special study done by the Zoological Society of London and Birdlife International (commissioned by Rewildling Europe), “Wildlife Comeback in Europe,” were summarized in plenary session.

Both of these reports and their recommendations were presented in-person to senior representatives of the European Union, Council of Europe and the World Commission on Protected Areas/IUCN.

The voice and action of WILD10 delegates – -individual experts, agencies, and organizations — were expressed as they debated and adopted 33 plenary Resolutions recommending positive, solution oriented actions on local, regional and international conservation concerns.

The Rewilding Europe initiative, which aims to rewild one million hectares of land by 2020, increased their program by 100% at WILD10 by targeting a total of 10 wildlife and wilderness areas of international quality for re-creating wild nature for better environmental quality, to stimulate local economies, and create new opportunities for experiencing and gaining benefit from a healthy resource of wilderness on land and sea. They also announced a new rewilding partnership community to further strengthen their ambitious and important goals.

Primary Forests — In a special meeting of leading global experts, the essential and unique role of primary forests of all types –temperate, boreal and tropical – was reviewed and reaffirmed, and a strategy created to more effectively advance their protection for the benefit of a healthier and wilder planet.

Three other initiatives were officially launched on Day Three of the Global Gathering:

Following the Global Gathering of plenary sessions, about 125 workshops, technical sessions, and roundtable discussions comprised the Global Forum (8-10 October 2013). Enriched by over 500 presenters over three days and organized into 17 program areas, the Global Forum produced lasting networks and new initiatives – recognizing “what nature needs” in the context of human development.

Science & Stewardship Symposium (S&SS) sessions confirmed how scientists and other engaged parties are scaling up research on the global impacts of climate change on wilderness, and on the importance of intact wild areas on land and sea to mitigate climate change. “Wilderness is our baseline, and ideal for researching and monitoring impacts as it is least affected by other influences,” said Dr Alan Watson of the Leopold Wilderness Research Institute and S&SS Coordinator. 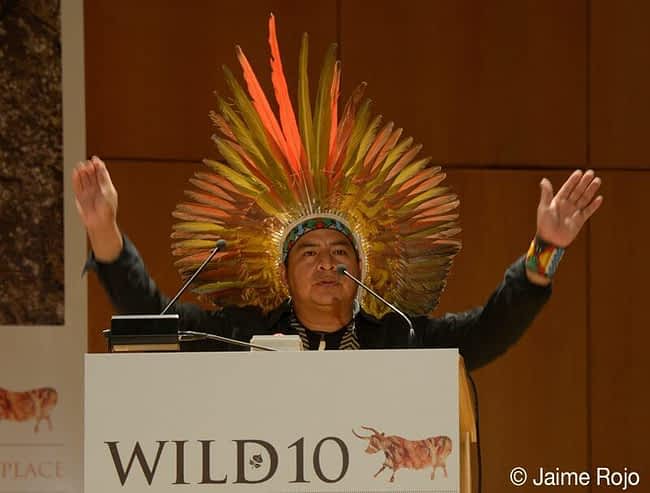 The Indigenous and Community Lands and Seas (ICLS) Forum advanced a vision for conservation that recognises the rights of Indigenous Peoples to protect and sustain wild nature according to their own bio-cultural diversity and values of local community stewardship. Responding to the dramatic increase the past decade in mining and other destructive extractive activity — notably in protected areas, World Heritage Sites and Indigenous & Community Conserved Areas and Territories, often taking place in defiance of national and international law — the ICLS called for ‘No-Go Areas’ for mining in order to protect these wildlands and the local cultures.

Sanctuary Asia Founder and President, Bittu Sahgal, remarked, “We were born of the wilderness, and though our generation seems to have lost its way and is remorselessly attacking the very source of life, nature… a vibrant new generation is determined to ‘right every wrong.’ With nature’s self-repair systems on their side it looks increasingly like the larger “CoalitionWILD” will end up not merely re-wilding the world, but, in the process, finding the soul we lost while pillaging our only home.”

Emphasizing that “culture is an important part of the conservation solution,” numerous artists such as Asher Jay (USA), Richard Green (Australia), and Beatriz Padilla (Mexico) presented their works and how they are used to advanced specific conservation agendas. The International League of Conservation Photographers convened some of the world’s top conservation photographers and filmmakers at the WiLDSpeak Forum…three days of dynamic presentations, trainings and planning in the area of conservation communications. The International League of Conservation Writers hosted a series of training sessions that were standing room only. Baba Brinkman, the Canadian rap artist, produced Go WILD! especially for WILD10, funded by The WILD Foundation. Other WILD10 cultural events – such as flamenco fusion by Raúl Cobo, the music of David Rothenberg, art works, films, videos shown outdoors in the Plaza, a youth-driven flash-mob “howl-in,” and tree planting — drew crowds throughout Salamanca.

Funded by The WILD Foundation, Boa Mistura, the urban art collective from Madrid, painted for the entire week of the Congress to finalize and present a gift from WILD10 to the people of Salamanca—a 27-meter-high mural/wall painting in the middle of downtown Salamanca.

WILD10 programs often integrated the Nature Needs Half™ vision launched at WILD9 (Mexico, 2009) to protect and interconnect at least half of the planet Presenters confirmed that conservation science shows that intact natural processes must comprise at least half of the land and sea for a healthy sustainable planet….and that such a vision and practice is an essential aspect for a healthy and prosperous human society.

WILD10 was the official launch of the WILD Cities Project, a new concept of urbanism where wild nature is highly valued space, and its conservation a conscious part of human life in cities worldwide. The WILD Cities Collaborative will bring together a diverse group of leaders representing cities from all over the world and identifying successful urban initiatives that are aligned with the principles of Nature Needs Half. This collaborative will work together to formulate common criteria for defining WILD Cities parameters and international guidelines for city planning, and create effective strategies for communicating to the general public that there is space for nature in modern cities.

Famed oceanographer Dr. Sylvia Earle was a key force in and conservation patron of the WILD Water program. A consensus marine wilderness definition and management objectives (developed through the NAWPA process between Canada, the USA and Mexico) were shared for the first time in an international forum and set the stage for understanding how marine wilderness can advance the protection, recovery and resilience of coral reefs, fisheries and migratory pathways, and marine resources upon which local communities rely. WILD Water delegates studied the impacts of over-extraction, coastal conversion, unabated tourism, and plastic and other marine debris as well as noise and vessel traffic disturbances to marine life.

Renowned photographers and filmmakers dialogued with conservation scientists and practitioners to strategize on how images and communications can empower both situational assessments and stakeholder acceptance. “Marine Wilderness 10+10” project was launched to work with the marine wilderness concept as a values framework to better protect marine areas.

In the closing plenary, Dr. Earle remarked that just as humans may be the planet’s biggest nightmare, we can also be its biggest hope. “We now have the tools and knowledge, the evidence, to know what’s happening,” she said. “We have to protect what remains in the natural world. It is what keeps us alive. If the Earth is at risk, we are at risk,” she implored.

“WILD10 achieves practical results, but it is more than just a Congress. It is a celebration of life, a heart opening experience, an opportunity to reconnect with nature and with people all around the world with a common vision. A vision of a future wherein humans will live in close harmony with wilderness and with each other,” said Odile Rodríguez de la Fuente, Fundación Félix Rodríguez de la Fuente president and WILD10 co-chair.