With 700 delegates from over 44 nations, the 7th World Wilderness Congress (Port Elizabeth, South Africa, 2-8 November 2001) was incredibly productive. Opened by the minister of environment of South Africa, the host country, the 7th WWC achieved a number of practical accomplishments. Proceedings: Wilderness and Human Communities: The Spirit of the 21st Century, Vance G. Martin and Andrew Muir (Editors). A few of the major achievements were:

$1,000,000 to South Africa for the Baviaanskloof (“Baboon’s Ridge”) Wilderness Area – $1,000,000 to Angola to help the Kissama Foundation to rehabilitate Angola’s Kissama National Park.

The first wilderness area on private property in Africa – legally declared and with a wilderness management plan – was announced by Adrian Gardiner, owner of Shamwari Game Reserve in the Eastern Cape Province near Port Elizabeth. Mr Gardiner put 16% of his land, over 3,000 hectares (7,500 acres), under legal servitude to the Wilderness Foundation of South Africa, founded by Ian Player and headed by Andrew Muir.

Proposed three-nation, transfrontier desert wilderness stretching from Northern Cape Province of South Africa all the way through Namibia and into Southern Angola.

African protected Areas Initiative – A new strategy announced, to be developed and launched at 5th World Parks Congress in Durban in June 2003. This is an initiative of numerous internationals agencies, funders and NGOs to address the need for more finance for all African protected areas.

20 wildlands managers and wardens from 13 countries graduated from a special training course on wilderness management, associated with the 7th WWC.

US Congressman E. Clay Shaw announced the imminent introduction into the US Congress of a bill addressing the need to stem the tide of unsustainable logging of tropical forests, using a number of different financial mechanisms such as debt swaps, buy-back of logging rights, etc.

Proceedings of the 7th WWC: 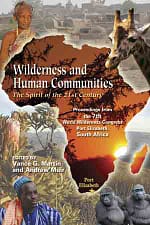 Wilderness has never been more important than it is today. But it is not as important today as it will be tomorrow. — Vance G. Martin. These are the proceedings of the 7th World Wilderness Congress, an event held just seven weeks after the September 11, 2001 terrorist attack on the United States. More than 100 registered delegates were forced to cancel, and many others who wanted to attend were unable to do so. Despite the seriousness of the times, the Congress convened in an atmosphere of hope and belief that wilderness is a fundamental, irreplaceable value and substance to all humanity. Wilderness gives us strength, sanity and inspiration–we should do all in our power to protect it.